After receiving a call from Woods Commercials, Aylesham, we drove down and collected Colonel K this morning.

The MOT retest has been completed and the brakes feel great. After it was diagnosed that the hub seal had leaked oil over the brake shoes, we decided it would be prudent to replace the seals on both rear wheel hubs, and as the brake liners were contaminated with the oil on that side, we took the decision to renew the brakes on the other side too.

The biggest issue was getting the hub nut undone. Eventually Woods managed to borrow a wrench that fitted the notched nut from a local Daf dealer (they didn’t realise they had one until they looked, it had never been used). 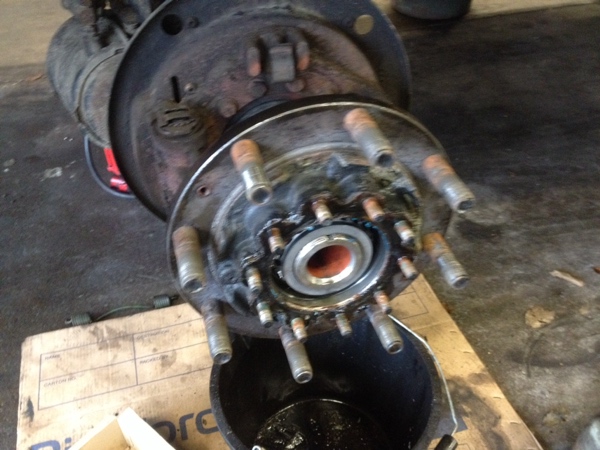 It seems that the seals are a known weak point on the Daf T244, and with this in mind we have decided to add a hub wrench and seal to our “spares locker”. The nut could have been removed by drilling holes on opposite sides of the nut and then splitting the nut in two halves, but even if you could get a nut to fit “in the field” it would prove very tricky to tighten it properly, as it is recessed inside the hub.

Steve and Jason at Woods Commercials have done a great job on the truck and despite the issues with getting ex military parts managed to get the work carried out fast enough that we didn’t have to pay for a full retest (it has to be within 10 days).

On the drive home, I decided to call into Sainsbury’s to put in a little cheeky 100 litres of diesel (about a third of a tank), as I was deep into the reserve of the gauge. It was a reminder as to how expensive diesel is here, £1.14 per litre, compared to for example:

For a full fill up (300 litres) that’s £177.00 cheaper in Nigeria than in the UK, or to put it simply almost all the countries that we will be travelling through are less than half the cost of diesel in the UK

Jac is currently looking into Medical and Repatriation insurance, it’s a bit of a mine field and the common theme is all the insurance companies refuse to cover you when travelling in a country or area where the Foreign Office advises against travel. It’s impossible to travel through Western Africa without going through these places, such as Mali, Mauritania, Western Sahara, so we better not fall ill or have an accident in these areas.

Still lots of sorting to do both in and out of the truck, but we are getting there……

← Prepping “The Colonel” for the trip
The Off is imminent →

2 Comments on “The Colonels back……”