After crossing the mightily impressive (and crazy expensive) Oresund Bridge that links Denmark to Sweden, we decided to head South to the tiny peninsular that juts out back towards Denmark called Falsterbo. I’m pretty sure most tourists would go the other way and head to the city of Malmo, but as mentioned previously, we are “cityied out”. This proved to be a great decision as we had found a beautiful area, full of bird life. After stopping at the a tourist information centre, complete with cafe, and a really interesting exhibition about local wildlife, geology etc, we asked if we could stay the night in their carpark, “of course thats ok”. This building is a stunning brand new centre build in the forest and facing the beach, I can’t imagine the cost of this place, but this was to be the norm as we travelled through Sweden. 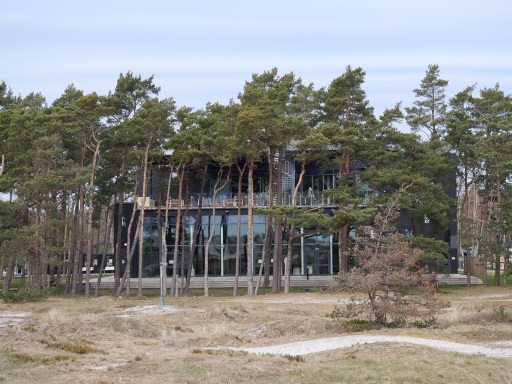 The beaches here were so clean, with lovely white sand.

Obviously being April it was still pretty cold and the wind was bitter, but mostly the sun did show its face, and we still saw no rain.

I will mention now Sweden is clean, very clean, with almost zero litter discarded, I think this is engrained in their minds at an early age, and boy does it work. While out on a walk we came across this display of items that might be thrown away, cig butts, cans and broken glass, etc, each indicating how long each will take to degrade in the wild. Very effective I think. There are rubbish bins everywhere, all obviously emptied on  a regular basis. I think our home country of Great Britain could learn a lot about this issue, especially in the south east of England.

From here we followed the coast east towards the Baltic sea side of Sweden, each night wild camping in some most incredible places. In my opinion it would be a travesty to travel in these Scandinavian countries in a camper and use camp sites, but it seems that this is what most people do here, maybe they need the security of a campsite, but I think its probably more do do with being able to plug in to electric and use their TV. We mainly aimed for nature reserves as these tend to be very small affairs, but all with a tiny car park, and usually in a stunning environment. 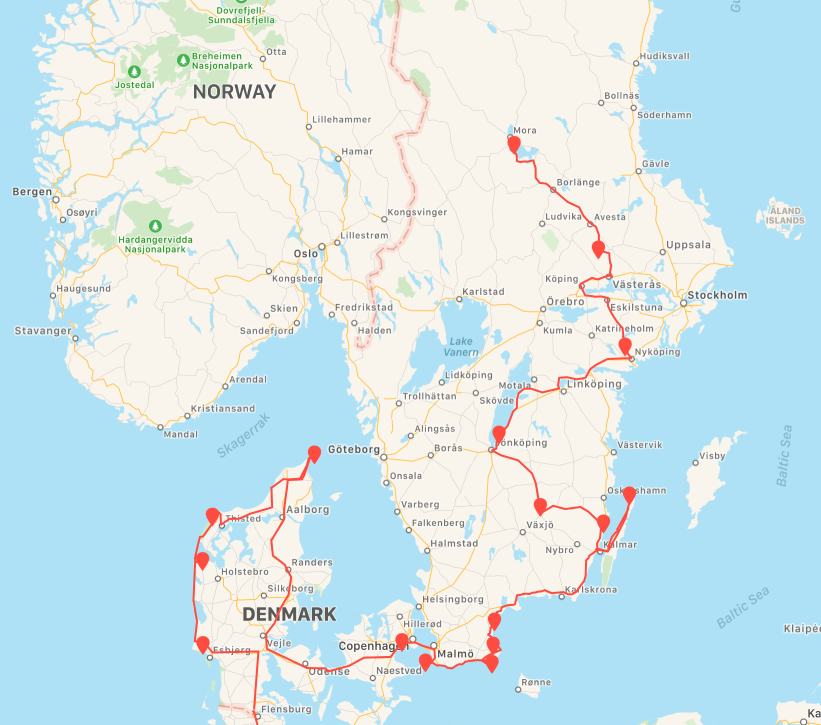 The map above shows our route up to now and shows where we’ve camped overnight.

The other advantage of staying in a nature reserve is that there is always great walk from your doorstep, and of course we don’t need to worry too much about where we go as the 4×4 Sprinter has oodles of ground clearance. 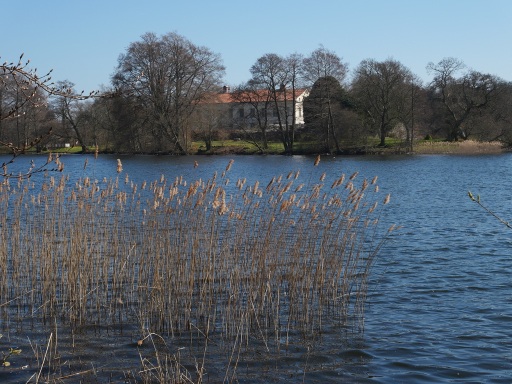 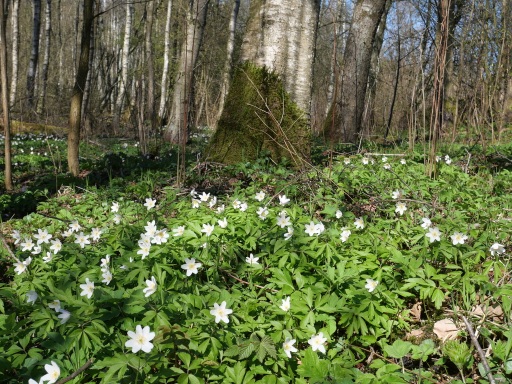 We stopped at one particularly great place called Stenshuvuds National Park (though didn’t actually camp here), its such a diverse area, with huge beech woodlands, rocky hills, ponds and of course amazing beaches, we had a great chat with a very helpful park ranger before setting off of a long walk. 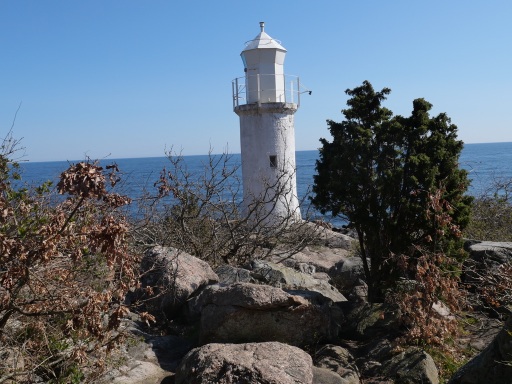 Apparently it has suddenly warmed up here in Sweden (perfect timing eh), and of course that means the wildlife waking up after the winter. Here the Adder population had definitely woke up, we heard quite a few moving on the forest floor as we walked past, (though without seeing them it was hard to be sure what it was), but we did see a few and in their early spring colours they were beautiful.

This was without a doubt the longest Adder I’d ever seen, and moved quite quickly, especially with me chasing it with my wide angle lens on my Lumix!!

We also came across another slightly smaller one on the beach in the large pebbles, this one was getting slightly angrier at me trying to get a decent photo of him. 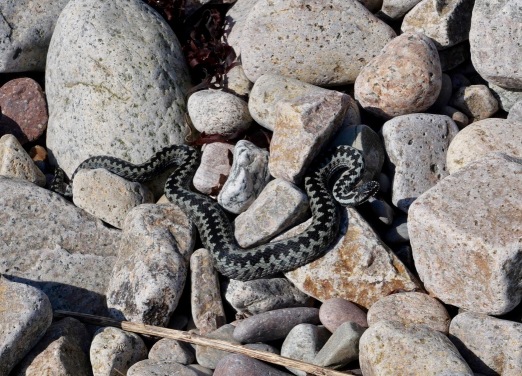 But gradually we started to move further north up the coastline, easter was approaching and there were defiantly more motorhomes about, though most of the time we camped on our own, we camped next to the sea, in the forests, and alongside small and large lakes. 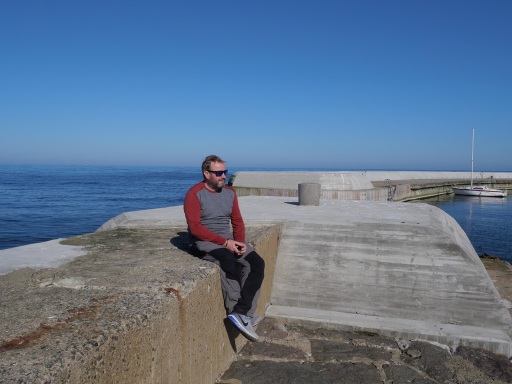 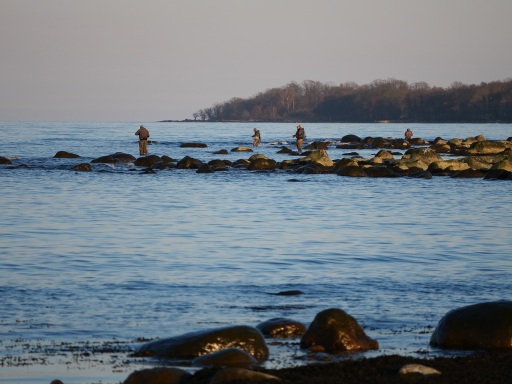 Whilst we were in Copenhagen we decided to completely empty our fresh water tank as we were on a campsite, and could then start with ‘new’ water on board (we drink water direct from the tank, so occasionally refreshing the water supply, and of course a couple of times a year a total clean out with special solutions is important), after filling back up with water I noticed that we had a slight leak, a slow drip coming from the drainage point. hoping it would settle we carried on, the dripping didn’t disappear, and it was far worse when we had a full tank. I tried undoing the drain again and quickly doing it back up ultra tight, but still it dripped. This went on for a couple of weeks, and although we didn’t want to visit Stockholm we might have to now to take a trip to the main Hymer dealer there. With another 5 months of travel in front of us, I couldn’t risk the leak getting worse. I contacted our friendly Hymer Owners Group facebook page, and apparently it is not unusual in a new motorhome with our type of drainage tap, and can be caused by debris in the tank getting stuck in the seal when its closed. I tried again (losing a bit of water every time), still bloody dripping!!!!

Then one morning as we were wild camped next to a stunning lake on our own, and an easy drive to Stockholm, I decided to give it one more go, and give it some welly this time, really agitate the seal under the plug, sure enough there was a tiny burr of clear plastic in the bucket i’d placed under the drain point, it was obviously from when they had cut the hole in the tank!!! All was now well in Swedish Hymer Land, no drips but more importantly no need to go to Stockholm.

As we turned north, the place becomes more rural, lots of forests, small villages, more forests, smaller roads (even the main ones), lots of lakes and forest after forest. Wild camping opportunities are almost endless especially with all the access tracks into the forests. After 12 nights in Sweden so far we have paid for camping for one night. We have decided this for a number of reasons, obviously cost is a big factor (this wild camping has saved us approx £300 so far in Sweden alone), but also its a far nicer experience for us, being on our own (mostly) and in a much nicer environment. We plan to use a campsite generally about once a week, to use laundry services for stinky clothes, towels and bedding, and also to plug in and charge everything up, including our leisure batteries (this does them good, rather than just relying on the vehicle alternator and solar panels).

We are probably about as far north as we will go in Sweden, before we head over to Norway, and are currently camped on a small island on a huge lake called Siljan, (its actually the 6th largest lake in Sweden) in a tiny harbour area. This as much as anywhere that we travel to, throws up the occasional surprise. Despite it being quite warm out of the wind (its a maximum of 20c during the day), there is still snow in many places (theres a ski area in the hills just off the island that looks like its still got a good covering). 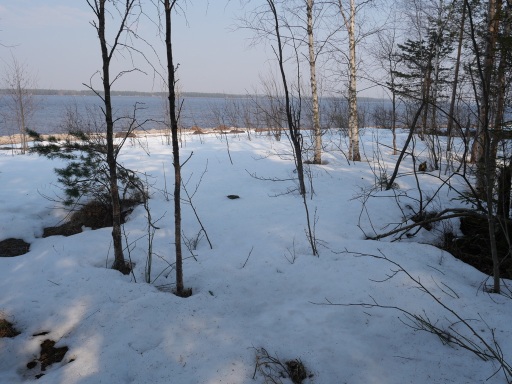 This may look cold but once back from our walk (where we bought an ice cream), we were sat out having a Gin and a Rum, about 100 metres from where the snow photo was taken!!! 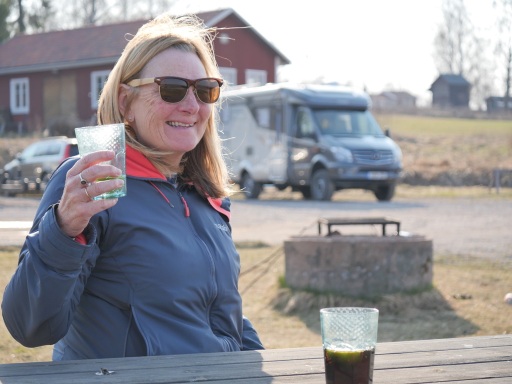 We had wild deer around the camper in the evening, and then to top off an evening of pleasant surprises, a half dozen young Swedish women decided to perform some sort of crazy speedied up version of Tai-chi on the jetty in front of us!!! like I say surprises, some I don’t like, but most I do.

Thanks for reading, from a sunny, and still rain free Sweden,