Sweden to the Western Fjords

When I last wrote in this blog we were on a small island in Siljan Lake in central Sweden, one thing that surprised me was the fairly low water level of the lake, you could easily see the high water line, and at the time it was well below these levels. This was Spring time, at the end of April and it was now warm and sunny, I could only imagine that the main precipitation falls in either rain or snow in the winter. So why was the lake still so low? Is this another indicator of climate change, or am I missing something?

From Siljan we headed northwest and suddenly the answer to the above question was clear. We found an amazing wild camp on the side of a lake, and not only was there still quite a bit of snow about but unlike all the dozens of lakes that we had previously seen, this one was still frozen. 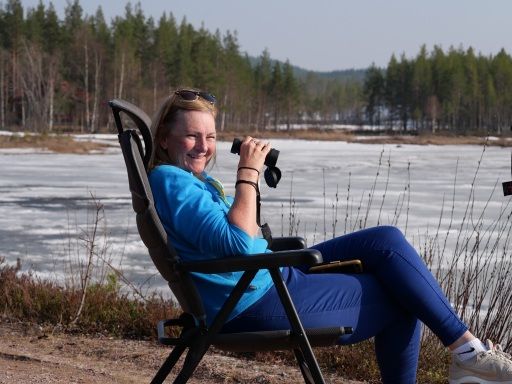 We were now at a far higher altitude, and obviously all this water still has to find its way down to the lower lakes.

It was still really warm in the sunshine (I was still wearing shorts), but at night the temperature really plummeted and all the melted ice on the margins of the lakes refroze overnight, my guess would be roughly -5c. The motorhome was fantastic in these conditions, with the heating working with the well insulated walls, floor and roof to keep us really toasty warm. This was a really special place to spend the night, all on our own, not another soul around.

The next day we continued northeast and visited Fulufjallets National Park, this huge area straddles the Swedish and Norwegian border (though there’s no road running through here). We had heard that there is some excellent hiking, so thought maybe we might spend a couple of days here. Mmmmmm the only problem was we were even higher and so there was a lot more snow and ice about.

The main reason that people visit Fulufjallets is to see the waterfall, (I think its the highest in Sweden), so that was definitely on the hiking list. We decided to go to the reception building to see where else we could walk to. In true Swedish style the building was magnificent, with lots of exhibits and although it was a Saturday it was very quiet with very few vehicles in the carpark. They obviously weren’t expecting too many guests either as 90% of the car parking area was still covered in deep snow. Asking the ranger working in the reception building about possible hikes drew some strange looks, “the snow is rotten at the moment, and so all the trails are closed apart from to the waterfall, stay on the marked trail!” She then noticed I had shorts on and I’m sure she thought ‘stupid idiot’!

A few meters into our hike to the waterfall, I found out why you stay on the trails in “rotten snow” conditions……….

The waterfall (partly frozen) was really stunning, especially in the backdrop of the surrounding snow covered hills. The walk up to the waterfall was quite treacherous on the ice and snow, but it was a lot worse coming back down without slipping over every few seconds. 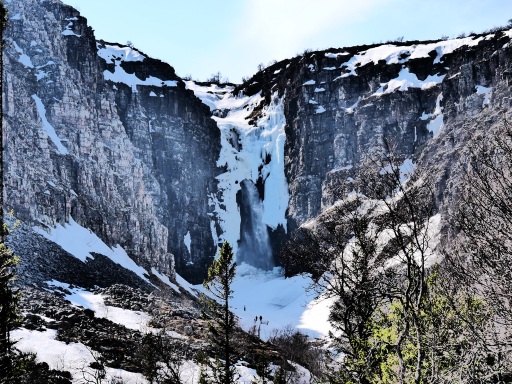 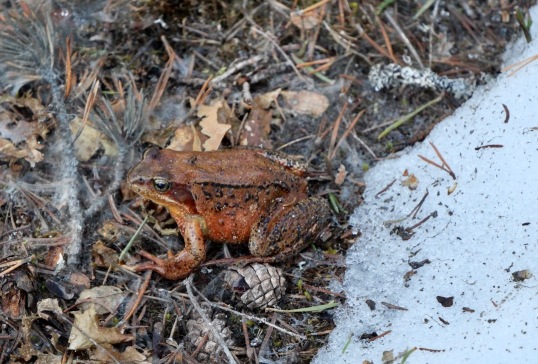 We spent another night wild camping next to a frozen lake, next to a very strange newly built church. 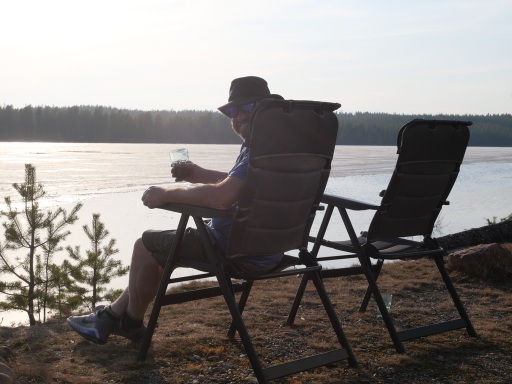 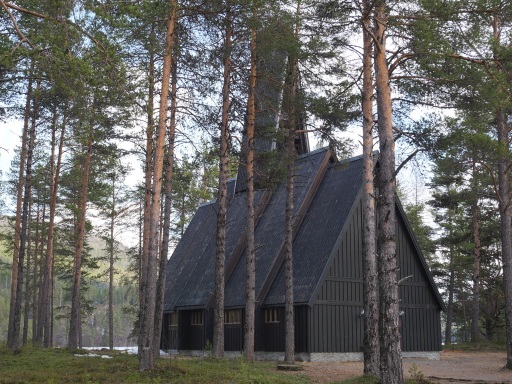 Some of the memorials were a couple of hundred years old and some were only 20 or 30 years old, it was a very poignant place, especially on a cold still evening.

Further along the shore we even stumbled across a couple of cabins deep in the forest and next to the lake, a fantastic setting, but a hell of a bugger to get your shopping to!! 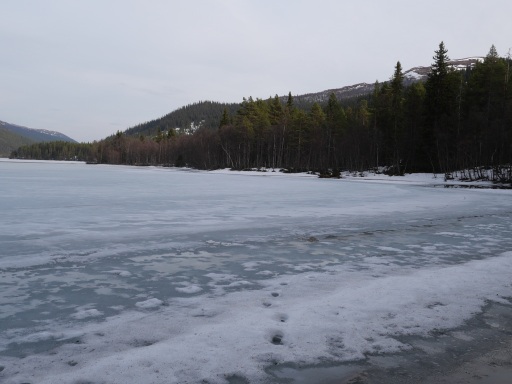 Next up for us was to head west towards Norway to start the trip up the coast to the Arctic Circle, the drive over the mountains was epic, the scenery was stunning, and at the very top of the mountain pass the snow at the sides of the roads was higher than our trusty Sprinter, Zorro (over 3 metres).

Our first overnight stop in Norway was Lillehammer, this was home to the winter Olympics of 1994 and was the year that the plucky brit Eddie the Eagle rose to fame in the crazy sport of ski jumping. We managed to park for the night right at the base of the ski jumping hill, and we were surprised to find the entire complex open for you to wander around, you can even climb the 870 steps to the top of the “launch site” for the fearless skiers. Of course we did this, and its a long long climb to the top. 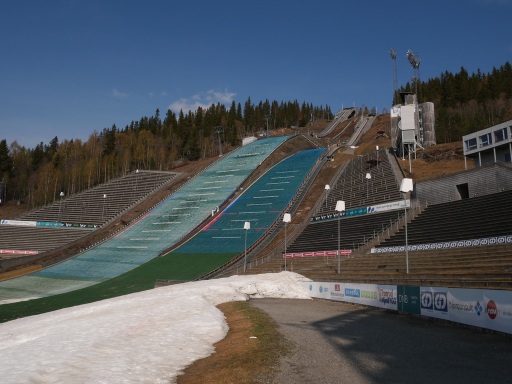 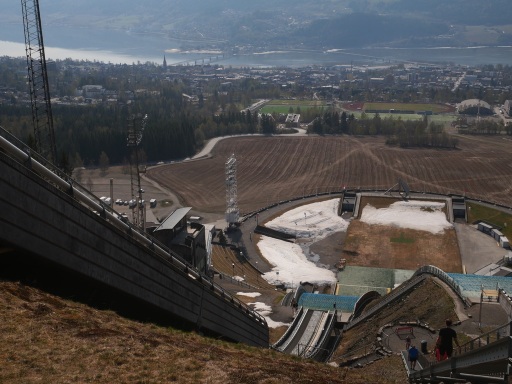 I just can’t imagine anywhere like this being open to the public and free of charge in the UK. The locals use the arena, especially the 870 steps as a fitness area, we saw a few people timing their climb to the top and back down, many also run up to the arena first from the town, this is also a very long way down. We visited Lillehammer town centre the next day and it is a very nice town with lots of high end shops, outdoor clothing and boutiques, a typical expensive ski resort really (though there’s not much downhill skiing done from here).

We then had to make a decision, our original plan was to visit Oslo to see a lovely Norwegian couple that we met in Namibia. but as we had travelled further north in Sweden than we planned, we decided to forgo the far southern part of Norway. So we drove directly east and hit the western fjords just north of Bergen at the far eastern end of the famous Sognefjorden. Wow, this place is truly beautiful, every corner you turn, there is more and more stunning scenery, water, mountains, forests etc etc. 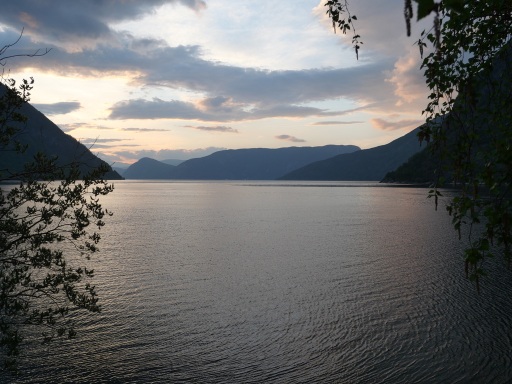 We have zigzagged our way “up” the coast following the fjords along their southern coasts then back towards the sea along their northern coasts, occasionally doing the odd mountain pass (if it is open, as some are still closed due to snow). 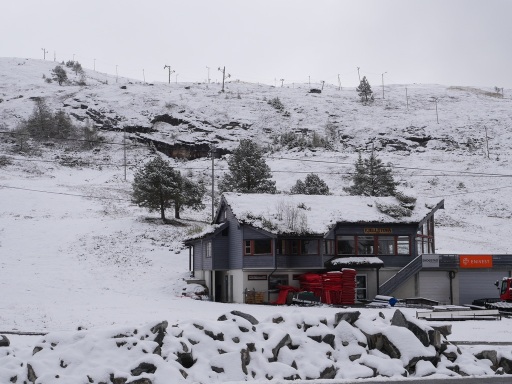 This is very early in the season for Norway, the plus side of this is the lack of other tourists, I can imagine that some of these smaller roads in the summer must be a bit of a pain with the huge number of vehicles driving on them. It does mean that we can camp virtually anywhere at the moment, two weeks straight of amazing wild camping without using a campsite, its pure bliss. There are regular motorhome service points, with drinking water, waste water disposal and of course toilet waste disposal. Many of these are free of charge, the rest which do charge, are usually in a fuel station, so we usually use these to fill up with diesel and then you can use their facilities for free.

The other downside of travelling in this area of Norway in April and May is that most places this far north don’t open until June at the earliest, this includes cafes, restaurants, and museums but with the crazy prices here that really isn’t a problem for us anyway.

Tunnels…….. Norway really does do tunnels very well. They are everywhere, one day we drove through 16 tunnels, the next day 11 tunnels and trust me there are some epic tunnels, many are 6 or 7 km long (4 to 5 miles). Some even have an overtaking lane (that swaps direction half way through) but the best one so far, actually had a roundabout halfway through the tunnel, where another road intersected the one that we were on. The cost of all this infrastructure must have been immense but, they are still building more new tunnels, sometimes to replace ferry services, or even to put in a bigger new tunnel alongside the existing one (then the old one gets used solely for pedestrians and cyclists). Most of these are free to travel on but if its a new tunnel then there can be a charge until its paid for, then it will become free.

Then there are the ferries, again there are hundreds of ferry services crossing the Fjords. For us time isn’t too much of an issue, so many times we have driven around a fjord rather than pay for a ferry crossing, its also because the journeys are so stunning by road anyway. But sometimes you have to use a ferry as the other option just isn’t viable. Some of these fjords reach inland over 200km (120miles), so you could end up driving an additional 300-400km just to avoid a ferry. So far we have used 5 ferries and they range from £20.00 to £45.00 per “voyage” depending on how far the crossing is. 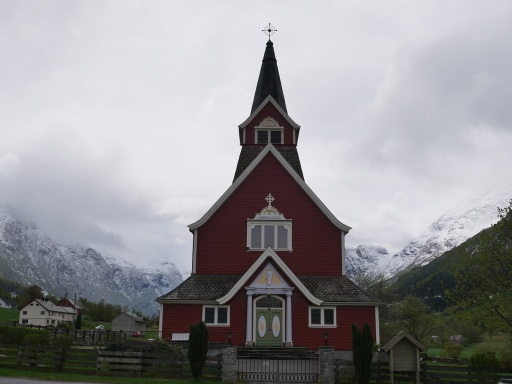 One day we drove to the far end of a fjord (Innvikfjorden) and then followed a small road weaving between small lakes until we could drive no further. At the end after a further 45 minute walk up hill, we reached the tip of Briksdal glacier, another breathtaking place. 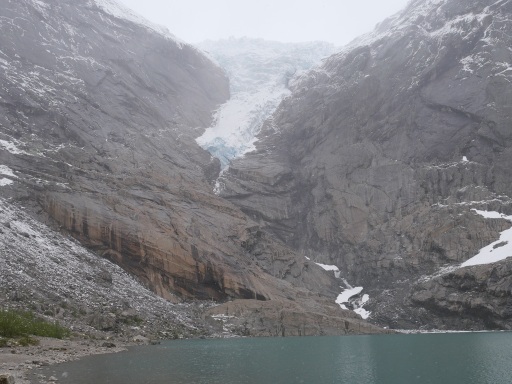 Then on the way down it started snowing big time. The weather here can be unpredictable and needs to be respected, at least I was back in long trousers……..

Back to tunnels….. We have entered a tunnel with 13c showing then half way through the tunnel its showing 0c before returning to roughly 13c again as you leave. We have also entered one of these subterranean worlds in bright sunlight and emerged in a blizzard. Then there’s the altitude change in the tunnel. We’ve entered a tunnel at sea level from a fjord only to drive up hill for 8 km and to emerge high up in the mountains!!! We drove one that actually goes deep under the seabed, starts on a small island, is 8km long, steep down hill (820ft below sea level) then steep uphill only to emerge into the town centre of Kristiansund. Why? probably because they can and more importantly they can afford to do it.

And then there are the bridges, wow they can build a bridge too. They have even built a bridge designed so that you can fish from it! I promise you this it is not a walkway or a cycle lane, this is a fishing platform!

As you can see the road is hardly busy, but what a backdrop, the tide was ripping through at such a pace that it was almost impossible to get my string of lures down.

Next time I will talk a bit more about the cost of Scandinavian travel in a motorhome and more specifically Norway, but in the meantime thanks for reading and I just want to introduce you to a couple of new friends that we’ve made, can you spot the odd one out? 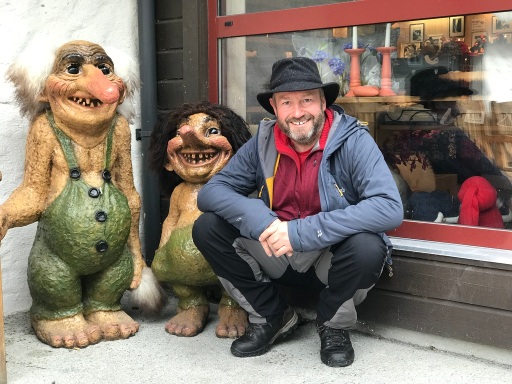 2 Comments on “Sweden to the Western Fjords”