We left Aljezur with a lovely empty laundry basket, and once again headed towards the West coast, this time to Praia De Borderia. The beach here is unbelievably wide, with huge sand dunes. The problem was it was just a bit too windy to sit out on the beach here. We bumped into another English couple (that had lived in a couple of African countries that we are looking to head through), they suggested that we try a place just down the coast that was a bit more secluded and had less motor homes parked up there. They weren’t sure exactly where it was on the map but luckily they had the GPS coordinates, so next morning we packed up, entered the coordinates into our trusty Garmin, it was less than 4km away!

Another fantastic beach, though much smaller, and not really any less motorhomes (the Algarve is very popular with French Campers). Another big surfing beach.

As we headed further South towards the busier Algarve, we thought we would seek out one last quiet free camp on the west coast, so we headed for Boca De Rio, as recommended by Russ and Kirsty, my god, what a mess!!

It was overrun with a permanent Traveller set. There were kids, dogs, rubbish and unknown things lurking in the scrubbery!!! Such a shame as it looks a fantastic spot, but there are new width restrictors in place to stop all but the smallest cars, Ive got a feeling that there will be no more free camping here once that lot have been moved on!

After that disaster, (thanks Russ ha), we headed straight for the Resort of Alvor. This really was a culture shock after the very peaceful North/South Coastal route. So busy, and full of holidaying Brits. As it was fairly late in the day and as we needed to top up with water we decided to stop at a campsite about 50m from the beach. This was a huge square area of land completely devoid of trees, and I’m sure at the height of summer would be packed with hundreds of motorhomes. But at only 4.50Euros a night, it really was worth it just to fill up, and empty out the nasty tank (again!).

This was the first beach in Portugal that didn’t have Surfers out playing, this time they were replaced with Kite Surfers.

Before leaving the camp site, quite a few English campers made them selves known to us, it was quite nice to have a chat with these guys, and if you are reading this, I hope you enjoyed the beers! A fellow Chippie amongst them too !

Once we had seen the Algarve in all its glory, we decided to crack on out of there! So decided to head straight for the border and back into Spain and into the City of Seville (or Sevilla). We have always talked out a city break to Seville, so this was the ideal, and cheap option to do this. Jac found a campsite located right in the city centre so we headed for that. After about 300km, we entered a very busy City. We followed the Garmin, only to find that at about 2km away the road was closed with a police road block, no diversion signs, nothing! So we went round again (about 5km), only to find the same again. This time we followed our noses to try coming in from the other side, same thing! It appeared that there was a huge fairground set up in the city centre and no traffic was getting near it, it was chaos!

Another quick look and Jac found another campsite about 15km outside the city in a suburb called Dos Hermanas, so we headed there. This was the tightest campsite we have ever parked in.

We decided to eat out that night so headed over to have a chat with the campsite owner, he recommended a tapas bar that all the locals go to in the local town, so after a 35min walk, we found the bar, again it was mental, very very busy (it was a Monday night). You just basically shouted out your order of food and drink at the bar and then went outside and waited, no table numbers, no names, but it worked! Fantastic food and wine, all for about £12.50 for both of us.

It turns out that there is The Spring Festival in Sevilla this week, thats why roads are closed and everywhere is busy. So after a 40 minute bus ride into the city, we did some sight seeing.

There was the Plage de Espana

This is an amazing place, with so many stunning details everywhere, from the hand painted bridges, to coats of arms etc

Next it was the Old City and Cathedral 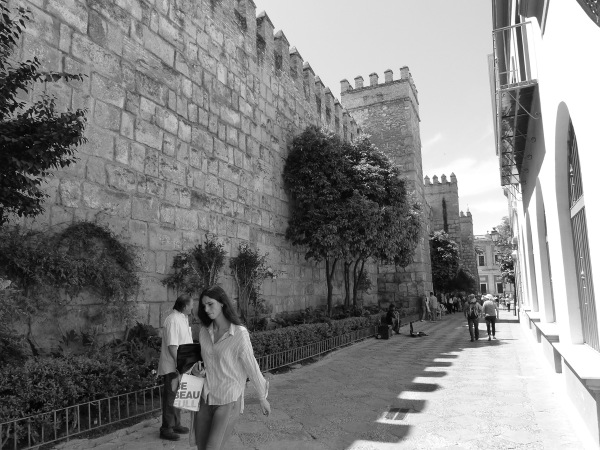 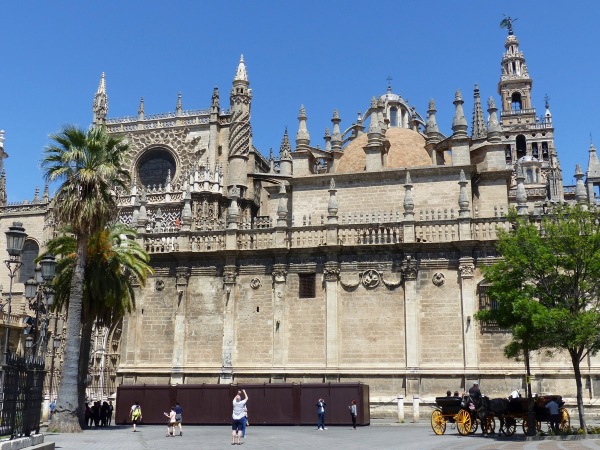 There are also shades of Modern in the Old City

After all this sight seeing we decided to head for the Spring Festival (on our original Campsite).

As we got closer we started seeing more and more women in traditional dresses and men is very smart suits. 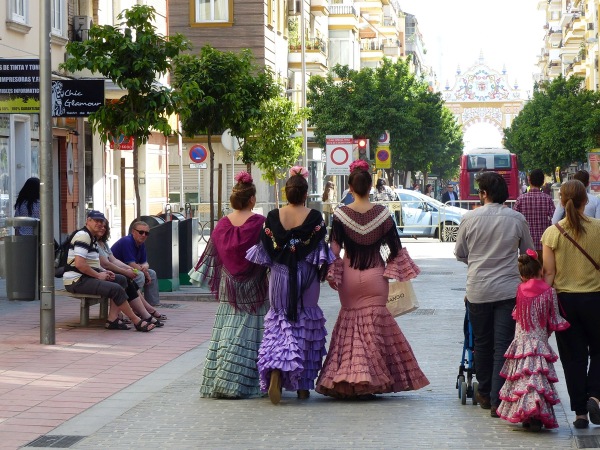 Once you enter the Festival, every thing goes crazy, there are horses everywhere, carriges, dancing, traditional music, and lots of alcohol being consumed. 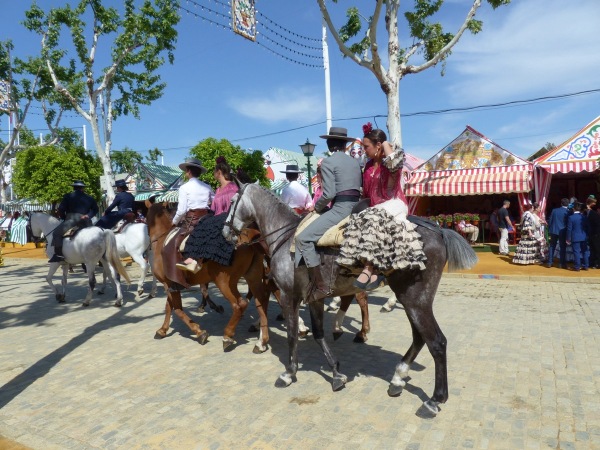 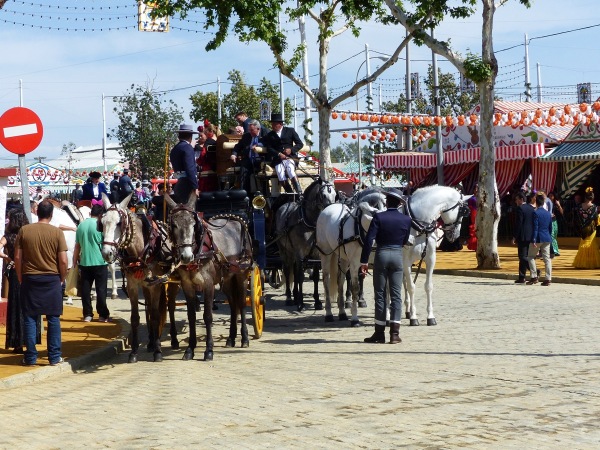 We saw one poor woman, completely trampled under a horse, which then proceeded to trample her again, one bloke completely collapsed unconscious outside a bar with a very fed up looking Policeman standing over him (it was very hot, 29c degrees at 19.00 hrs).

It really was a riot of colour and noise.

Next morning we head off from Sevilla, and headed to the Port of Algeciras, near the Gibraltar.

On the way there we came across this sign on the motorway, I think it is asking all bikers to start practicing their stoppies! Only in Spain eh 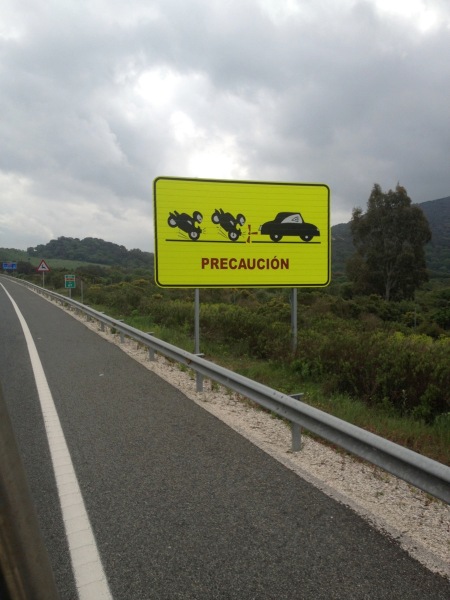 The plan was to head for the Port to book a ferry for tomorrow to Tangier Med in Morocco, but we found out that there is a guy in the nearby town of Los Barrios, who sells tickets from an agency for all 4 of the ferry companies that run this, or similar routes across the Med.

The guy sorted our Tickets for 2 adults and our 10 tonne camper for £130.00, and then presented us with a bottle of wine and a cake for our custom! Its an open ticket for any sailing tomorrow, he even preprinted our vehicle importation documents and gave us our blank immigration forms, very efficient.

We are having a slap-up McDonalds for tea, one last ditch of Europe (oh and a free WiFi).

So tomorrow we are off to North Africa finally…….

6 Comments on “Return to Spain”