We left Meknes early in the morning with the intention of stopping in Casablanca on the West coast. I think most western people have the romantic image of the city after the old black and white film using the same name. As we got closer to the city (about 40km still showing on the sat nav), we realised that the place is huge, and looking very industrialised. The separate town of Mohammedia further north, is almost joined to Casablanca, and as we drove around the vast City, we soon decided to change our plans and not worry about going to Casablanca. So we pulled over, and googled for any suitable campsites further down the coast, we didn’t want to go too far South as we had already done 300km, and it was quite late in the afternoon. There was a link to an old posting on Horizons Unlimited, showing a Campsite at Dar-Bouazza, about 30km further down the coast. It was called Camping Hawaii, so it sounds lovely and very close to the beach. That’ll do for a couple of nights then.

After finding the small town of Dar-Bouazza, and having the GPS co-ordinates entered into the Garmin, we just had to follow our trusty Garmin, nicknamed Margret. Well Margret took us to the entrance to a very narrow dirt track (with a very old camping sign), so we turned in there, and ducked under some low power cables, got a few guys to kindly move their cars, dodged a few donkeys and after 1km, we came to a very closed campsite Hawaii.

As you can see from the photo, it doesn’t really remind you of a Pacific Island Paradise! Anyway the noisy arrival of Colonel K, driving up the dirt track (definitely not suitable for a normal motorhome), was enough to have someone opening the gates! “Are you open?” we politely enquired, “of course we are” was the obvious reply in Arabic! After the Daf refusing to fit through one open gate, the owner demanded that his men open the other gate too (he didn’t want to lose a valuable customer). Im sure that second gate hadn’t been opened in a long time, and still wouldn’t open fully. Anyway we drove in, then agreed, and shook hands on the price of 60DH (just over £4.00) for a night. At this point we had decided that the campsite was not open, there were no facilities (no water, toilet disposal etc), but even though the place was very isolated, and indeed quite strange, it is a testament to how safe Morocco makes you feel, that we were more than happy to spend a night here. Anyway at least its near a nice lovely sandy beach eh.

So after managing to get out of the campsite (no easy task with those huge rusty gates), we thought we would walk the short distance to the beach, which was through some shrubby waste ground. First impressions weren’t great……..

For as far as the eye can see, (and trust me its a lot worse than this photo shows), the sand dunes had been covered by old building waste such as hardcore, steel bars, and tonnes of rubbish, obviously the actual beach wasn’t as bad as the tide/current has cleaned it up, but what a waste of a beautiful coastal environment. We genuinely love Morocco and its people, but they can’t seem to grasp that they need to look after their fantastic country and its environment.

Next morning, we followed the R320 coast road down to the ancient town of El-Jadida, it was only about 80Km, so arrived at a very large campsite on the edge of town at about 11.00am. After a quick bit of plumbing (the small plastic filter by the water pump had worked loose), we decided to walk into town. The walk is approx 40 minutes and follows the beach, some of which is “pedestrianised”, apart from scooters and chicken chasers, so you still have to have your wits about you. The beautiful sandy beach runs from the Harbour of El-Jadida for as far as the eye can see, the beach was busy, but barely a soul was sunbathing, it was full of football pitches, the whole beach for miles had been levelled and scraped to leave perfectly flat (but slightly sloping) areas with which to play on.

It was like a whole league was playing on the same day, and in the same place. There were even 5 a side pitches set up with tiny goals. Males of all ages and abilities were playing, and generally the standard was quite high, even the kids were taking it very seriously. Some teams even had either their own full kit or tabards. It was great to sit on the beach cafe terrace and watch the footie, even Jac was getting into it!

Eventually I managed to tear Jac away from all the sweaty football players, and we carried on into the town, the walk past the fishing harbour was “interesting”, with bags of rotting fish guts and heads just laying there with the swarms of fly’s in the afternoon sun.

Next past the Harbour is the old Portuguese Fort. 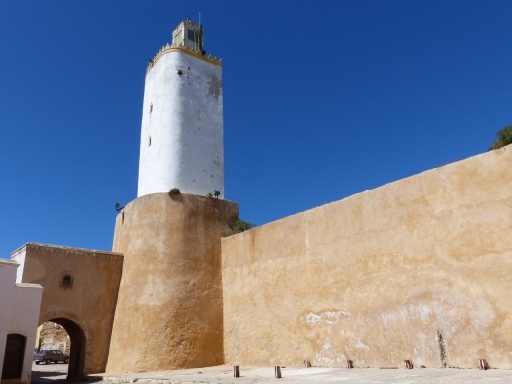 The Citadel was built by the Portuguese from 1513, was completed in 1541, and it was an important Settlement on the African coast. The original lighthouse was converted into the Grand Mosque. Underneath the buildings shown above is the “Cistern”, this was originally used to store Munitions, then in 1541 onwards it was used to store fresh water for times of shortages. There is just one centre, circular opening in the ceiling, which throws a shaft of light into the Cistern, this coupled with the very shallow covering of water over the flagstones, produces a fantastic atmosphere.

Amazingly we were the only people down there, and although we had read about the place in our guide book, there was no signs for it, we just stumbled upon it as we were walking round the very narrow streets within the fort walls (this is full of people living here and going about their lives). If you are ever in the area, it is well worth a visit.

Whilst on the campsite at El-Jadida, we met a lovely Dutch couple with an impressive Iveco based Overland truck, Johan and his wife, The truck is German ex-miltary, originally built in 1988, and has an air-cooled Maguri engine (its even thirstier than Colonel K). 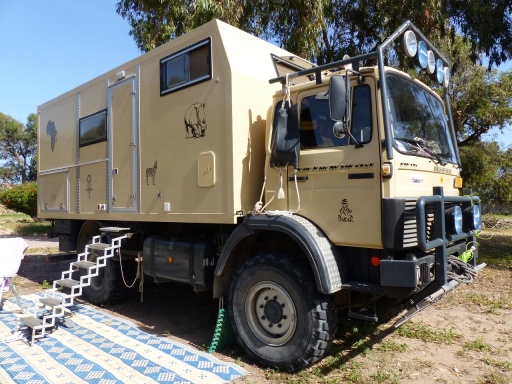 They had just come up from the Southern area of Morocco, and gave us some valuable advise. It would be great if we manage to meet up with them on our return trip, as they are planning to come further South next year.

There was also the following Unimog on the site, but we didn’t manage to meet with the owners (not even sure where it came from).

We stayed at El-Jadida for 2 nights, before moving further South towards Essaouira (where we have arranged to meet our good friends Richard and Jocie in a weeks time), this time looking to stay in the coastal town of Oualidia. We had found the co-ordinates of a campsite that doubles up as carpark, but when entering them into the Garmin, it confusingly showed a different town, however the distance and direction seemed about right, it turn out it was correct but Garmin have decided to rename the town!

On the way the coastal road goes through mainly poor farming areas, and some small scale salt processing plants (dug out pits in the fields). We also stopped to top up with diesel, and pulled into a brand new filling station. Amazingly, a young woman appeared to use the pump for us (this is quite unusual for a woman to do this in Morocco, its a mans job), anyway I instructed her to fill the tank to the bottom of the filler neck (in my best “Arabic”/french), as she started filling I noticed that the price per litre was 9.2DH, we had never paid more than 8.8DH, so hastily changed my mind and told her just to put 800DH in (I thought I’m not paying for this new smart filling station, no wonder no one else was here). Afterwards, I thought more about this “massive” price difference, it equates to instead of paying 61p a litre, it was 63p a litre!!!! Morocco does get to you after a while!

Oualidia is a very different place to anywhere we’ve see in Morocco before, its very very smart, with the “well heeled” from the cities using it as a holiday resort. The cars are not your usual beaten up Mercs or Renaults, (well they are still here but not so many), instead it is full of Range Rovers, Audi’s, VW’s etc, all new. The people are dressed in a more western style, including a lot of the women.

There is a most amazing lagoon here, this is what attracts the people as it ensures safe swimming and bathing, apart from the dozen or so small boats ferrying people out the the island into the centre of the the lagoon, with their outboard engines carefully dodging the swimmers etc. 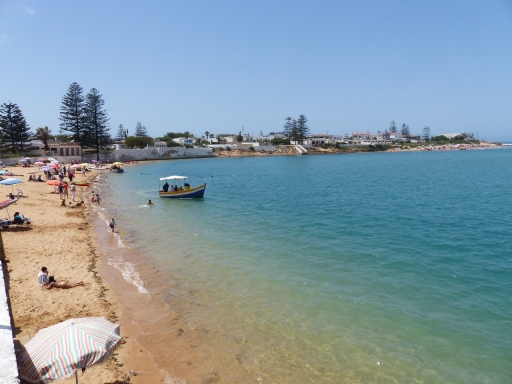 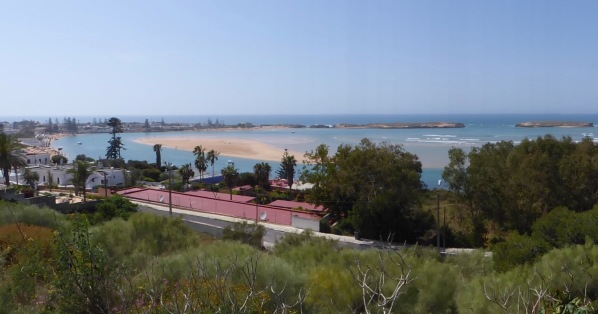 Once you leave to beach area, and walk up the hill into the old town, you realise that this is indeed a town of two half’s. Once again its lots of market stalls selling fruit and veg, butchers with whole carcasses hanging up, and street cafes selling skewers of meat, tangine’s and chicken, all smoking away on top of the grill. We went in one ‘shop’ near one of these grilles, and it was completely full of smoke, no one batted an eye!

We are looking forward to seeing Richard and Jocie in Essaouira (on the coast due west of Marrakech), who have kindly offered to bring out a few items for us in their hand luggage, a spare camera battery, a Garmin SD card for Southern Africa, some extra tooth floss sticks (to keep my Dentist happy), and a milk frother for Jac’s (yup a milk frother!).

← Colonel K hits Morocco
Where have all the PLUGS gone ? (Living in a box No 2) →