After a protracted stay in Ouagadougou, Burkina Faso, due to the Visas for Ghana taking three working days (though when we arrived at the appointment time of 11.00 am on Monday morning, our application forms were still sitting on the guys desks exactly where we left them, then it took him less than 30 minutes to process them!), we left the city and headed for the Ghana border post.

The road from Ouagadougou to the border is a good tarmac road, and passed through a National Park in the south of the country, it was very heavily forested, and the chances of seeing any wildlife during the day was very slim. But our trip has been full of surprises and this day was no different. We spotted a herd of elephants in a stream bed on our left.

We watched them from the truck for about 10 mins, then the largest of the males decided that he didn’t like Colonel K and started to charge up the bank, Time to go, quickly!

We also spotted another larger herd of elephants about 10km further along the road, but these were heading off into the dense bush (that is thick and lush at the moment). We were exceptionally lucky to see these elephants in Burkina, but it does show that they are there, and the dangers of meeting one on the road.

We crossed a large river on a very old bridge, which didn’t look strong enough to take the truck, the “new bridge” was being repaired 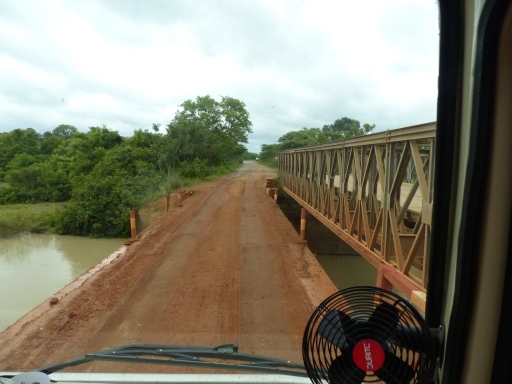 After clearing customs and getting our passports stamped for exit on the Burkina Faso side, we crossed to the Ghana side. It was weird, after spending over 3 months in French speaking North and West African Countries, all the officials spoke English. Nice but weird.

Before passport control, or customs, we had to have our temperatures checked and each fill out a health questionnaire (this is in response to the Ebola threat), and thank goodness it was in English. Then a very pleasant guy in military uniform took our photos, and scanned our passports, before presenting us to his boss. We also had to show our Yellow Fever vaccination certificate, this was first on our trip. After meeting us with a hand shake and telling us how welcome we are in Ghana, he asked us how long we wanted to stay in the Country, I said “90 days, and we have paid for a visa for 90 days”, his reply was “unfortunately that is not possible, and we can only let you stay for 60 days, the rules are different now you are at the border”. He would not budge on this, and if we want it extended then we would have to go to Immigration in Accra. In reality 60 days will be plenty, and at the Embassy the choice was 30 days or 90 days, but as we are learning, this is Africa!

We had a short wait for the customs ‘top man’ to arrive, who apparently was the only one that could fill out and stamp the Carnet de Passage, but once that was done, we were good to go. The whole border crossing took approx 90 mins, and no bribes were paid, and on both sides we were treated with kindness and respect. The touts however were a bloody nightmare! As soon as we got to the Burkina border they were on to us, and wanted to “help” us through the system, at one point one guy on a motorbike started to get quite pushy with us, and even though we made it quite clear we didn’t want any assistance, or to change any money with him, he still followed us right through to the Ghana side, even the officials told him to go away. We refused to pay any money to them, but eventually we got a acceptable exchange rate from the CFA’s that we had left into Ghanian Cedi’s from one guy who was much more pleasant to deal with.

As with Burkina Faso, Ghana is beautiful and green, with lush vegetation everywhere at the moment 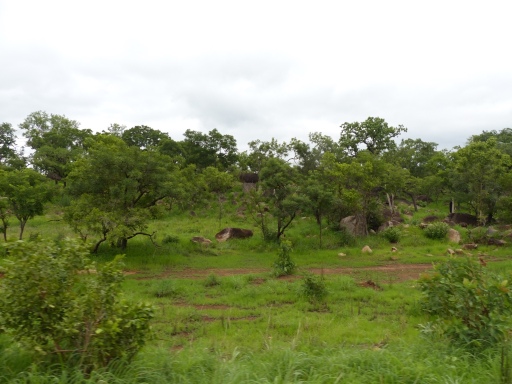 We arrived late in the afternoon in the northern town of Tamale, and couldn’t find a campsite or anywhere suitable to wild camp, so we called in a hotel/lodge on the outskirts of the town, and Jac managed to talk them into letting us “camp” in the carpark (for a small fee of course). There was a lamp outside the truck, and it highlighted a massive hatching of large flies.

Next thing we knew, there were 5 or 6 children, running around and picking up the flies off of the floor, they were so excited, dancing and laughing, and putting them into small buckets. We’re not sure if they were collecting them for some sort of medicine or even food for themselves, but eventually the security man appeared and shooed them off.

The smaller villages in Ghana, are still the traditional construction, and many here make a living producing charcoal.

After about 150km we arrived at Mole National Park (pronounced Molie). 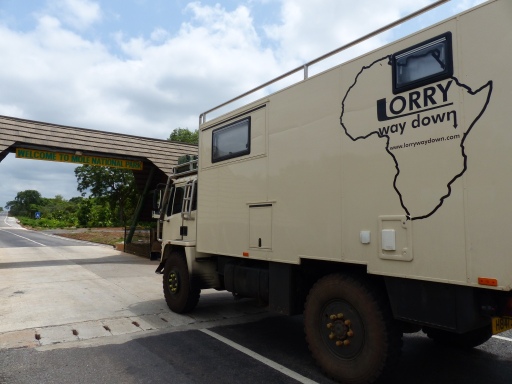 We paid the park entrance fees (based on the number of people and the type of vehicle) 95 Cedi’s (£17.90), and drove up to The Mole Motel, (the only accommodation and camping in this huge park) to enquire about camping. The lady at the desk told us that the campsite is shut, and not used anymore. It was obvious that she wanted us to pay for a room. Eventually she said we could park on the top of the escarpment near to the Motel (obviously on our own). What a spot! This is the view from the truck, looking out over the waterhole.

And this was our view about an hour after parking up. 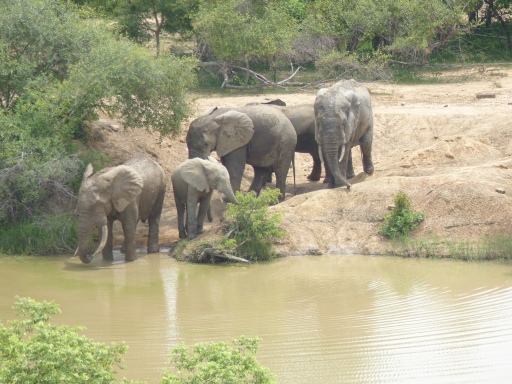 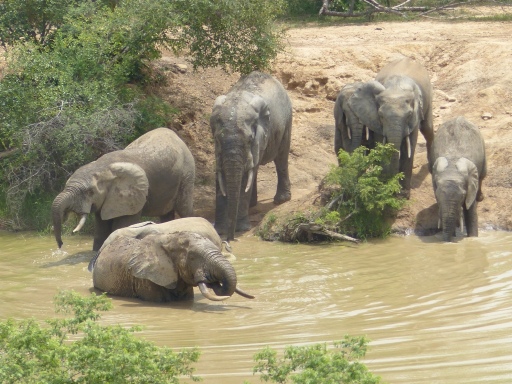 The campsite also has other residents though, Vervet Monkeys, Warthogs, and Baboons.

Just after we got settled, an old guy turned up and introduced himself, he was the Chief from the local village, and used to work in the park as a Ranger (now retired), he gave us lots of info about the park, and warned us that the Baboons are a growing problem, and not to leave any windows open on the truck when we leave it. As the day went on the Baboons we getting more and more in number and getting bolder with us too. We had thrown stones at them, shooed them away, but still they hung about (at a distance, well about 10 metres from the truck).

Then just as our backs were turned (watching game at the waterhole), we heard a bang behind us as a large baboon jumped onto the roof of the truck. As we turned, we saw it disappear in through the roof light above the table. We were only a few metres from the truck, and I was up the steps very quickly to be confronted by two baboons, a huge adult female, and her youngster. Now, I promise you that an adult baboon inside the confines of Colonel K is a scary thing to face up to, especially as she had her little one with her! As I entered (in a rush), she was grabbing anything that she could see, I shouted and yelled at them, she jumped from the table, onto the kitchen worktop, then onto the bed, both her and me were screaming! She then spotted the open roof light above the bed, and she jumped for it only to misjudge it and fall back onto the bed, facing me again with teeth barred! This was looking like it might end in tears (my tears)! She then jumped again and made it onto the roof. The younger one went for the side window alongside the bed, and jumped out, but hanging on to the outside, with Jac shouting at it, then it dropped and ran away to it ’s Mum, now on the other side of the truck. The bugger had stolen our dinner!!!!

A packet of spaghetti, and a jar of Dolmio Bolognese sauce. 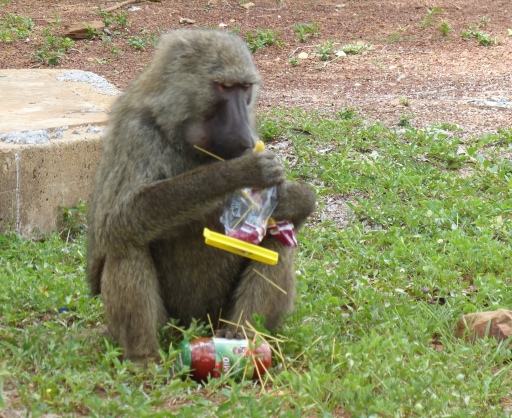 And she wasn’t going to give it back.

She sat and ate the dried spaghetti, and eventually opened the jar and ate the lot! She then picked up the little “un, and walked off. 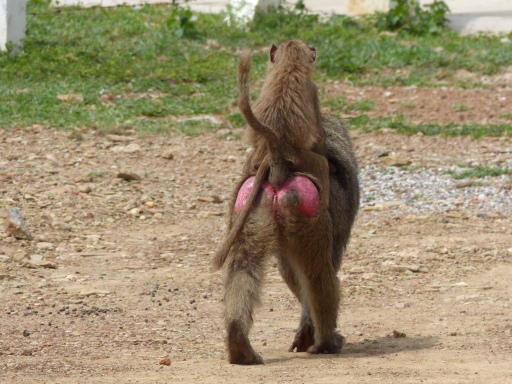 Lesson learnt, if baboons are about, close the windows, even if you are at the truck.

There were a bus load of school kids from one of the nearby villages visiting the park, and of course they wanted to see inside Colonel K. Its quite embarrassing for us really, as most of these families don’t even have toilets or a shower in their homes (they might have a communal one if they are lucky), and of course we have all these things built into a truck. They were fascinated, and so excited to go in and have a “tour”, we even had books. They were all really great kids and so polite and of course wanted to be “snapped”.

We had to have a rethink for dinner that night, but at least the baboons didn’t find the de-frosting mince, so it was just mince, onion, and tomato with a bit of chilli of course. 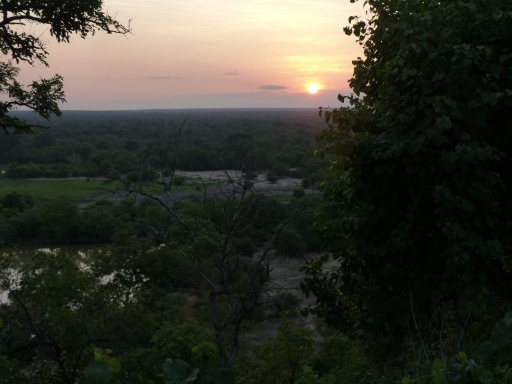 Next morning, we had arranged for a ranger to take us on a walking safari, so it was up early, and meet John (the ranger) over at the park information centre.

I hadn’t expected to see much on a walking safari (we had said 2 hours), but it wasn’t long (about 10 minutes after setting off), that we spotted a herd of young male elephants

After watching these for about 10 minutes, we set off into the bush, and saw Kob Antelope, and a few Waterbuck.

John also explained that the call of the Ibis bird, gave an indication as to where the elephants might be (it could also mean humans, which of course could be poachers). He called them his spies.

At one point we could see Colonel K, parked on top of the escarpment in the distance, it proved to us what a fantastic spot we had parked in. 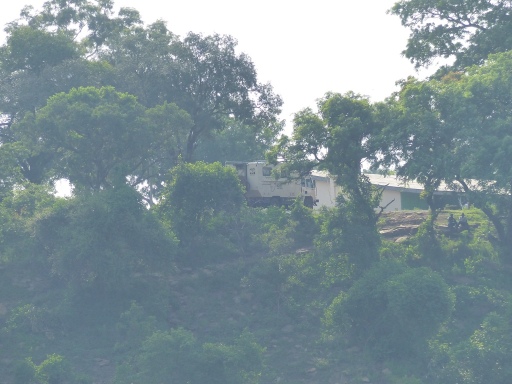 On the way back, we came across another herd of elephants at a waterhole (the one below the Truck), and it was amazing to get so close to these beautiful animals, and on foot. 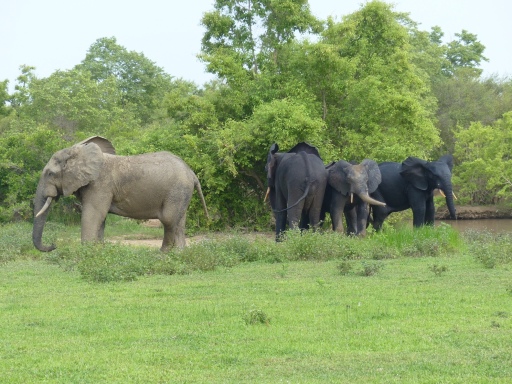 Its such an relaxing place (apart from the baboons), that we have decided to stay for a third night and maybe take a game drive tomorrow, or maybe another walking safari. By the way, the walking safari cost us £8.00 for the two of us, for 2 hours, and beer from the Mole Motel (great name) is 94p for just over a pint! Rip off Britain? The climate here, whilst hot and humid (about 32c), is much more comfortable than what we have had for the last eight weeks or so.

There are two young Dutch women staying at the Motel at the moment, and they are going to travel the 500km to Kumashi in the back of the Colonel (we only have 2 seats in the front). I’ve warned them that it will be hot, sticky and extremely uncomfortable in there, but they seem to think its better than the public transport that they used to get here from the coast. Well we will see if they last the distance.

One Comment on “Northern Ghana, elephants, thieves and a huge Mole”