Christmas and New Year is a difficult time to be camping in South Africa, because as we are in the southern hemisphere it is their summer and so for about four weeks everyone goes camping crazy. We found this out the hard way in 2015, the first time we spent christmas over here.

Jac had really wanted to revisit DeHoop Nature Reserve on the Cape Overberg peninsular, a couple of hundred kilometres east of Capetown, but we were told by the company that manages it, that the campsite here was closed with no date to re-open. So we bit the bullet and booked into one of their “Camping Rondavels”, this was literally a round building with a bed and a sink in it and not much else. There are 5 of these here and all have to share toilet and shower facilities (two of each and all completely outside with no roofs). The cost of one of these was £75.00 per night. This was obviously a lot more than we usually pay for camping, but camping prices are increased over the holiday period so we would have been paying £40 to £50 anyway (especially on this southern coast). Try getting accommodation over the xmas period in the UK for £75 per night!

The big plus for us was the fact that they put us in the 1st room (called Black Harrier) and this meant that we didn’t have to park the truck in the small carpark. We managed to squeeze it in down the side and right next to our outdoor seating area. It was so close that we tied our washing line from the truck to the Rondavel. In actual fact the room was great, and of course we are used to shared ablutions with camping. 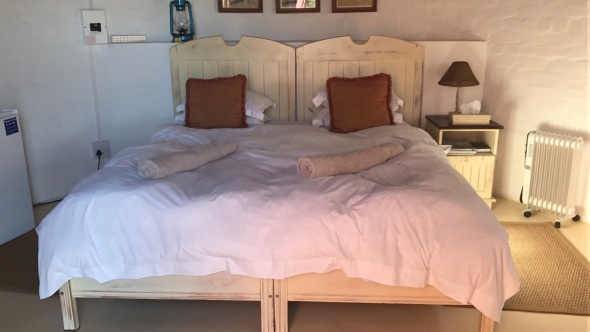 The seating area outside our “luxurious pad” overlooked the lake and it really is a bird spotters paradise, it is teaming with all sorts of birdlife, and the sunsets here were, as always in Africa stunning.

DeHoop really is a great place for a holiday break, they have a massive assortment of accommodation, from our most basic room to luxury family units in huge old colonial buildings. 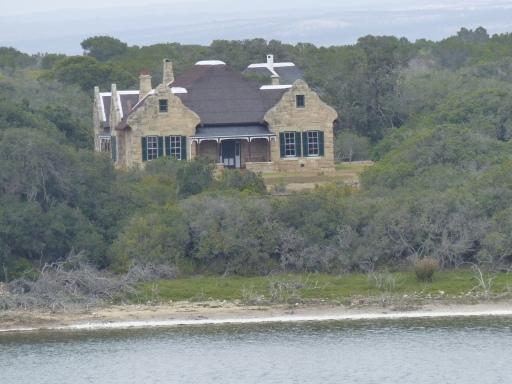 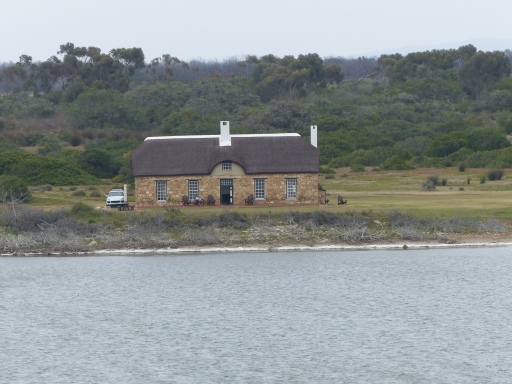 There are two outdoor swimming pools (one that is adults only in the spa area), a bar and restaurant, limited game driving, and access to a stunning beach (though this is a 15km drive on gravel roads from the main area). We stayed in our Rondavel for 8 nights and loved our time here.

For many people including us, the main attraction is the access to the stunning coastline, the blue waters of the Indian Ocean, are beautiful and at the right time of the year this is the number one spot for land-based whale watching in South Africa. Alas it was not the right time and subsequently we didn’t see any whales, but we did take Father Christmas with us…… 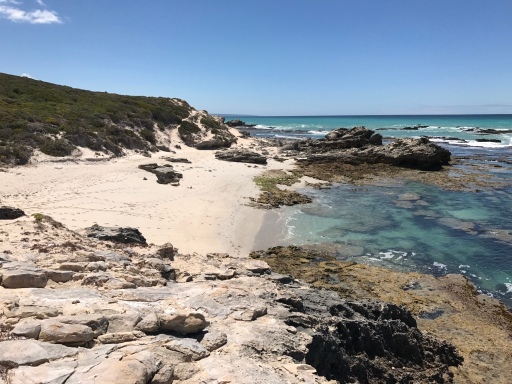 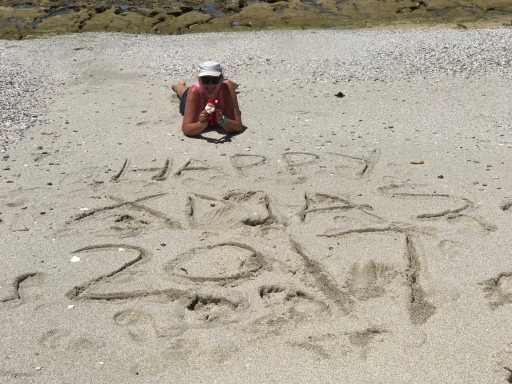 The other thing that we like about DeHoop is the hiking trails, both in the coastal area and also into the Fynbos (scrubby arid terrain) around the lake. I sometimes think that we worry about snakes too much on our walking trips in Africa (meeting a Black Mamba in the hills near Windhoek, Namibia didn’t help, oh and nearly treading on a snake in the Ghana coastal rain forest…..), we know they are about, you just don’t see them.

At DeHoop we heard of a few encounters with snakes while we were there, a Puff Adder in the middle of a walking trail, the restaurant manager showing us a photo he had just taken of a Boomslang in the staff rest area, and incredibly (and much to my annoyance) the “adult only pool” had children in it due to a Cape Cobra refusing to leave the side of the “family pool”. But when out walking we try to do heavy foot falls to create vibrations and scare our reptilian friends off before we get to them (this method doesn’t work with Puff Adders though they just stay very still, and bite if stepped upon). This does work…….99% of the time.

One morning we had been out in the Fynbos for just over an hour, on a trail that we hadn’t been on before, when we came out into a small clearing by the lake side, about a metre from where we came out of the bush was a massive Cape Cobra! The stunning but deadly ‘coppery yellow’ 5 foot snake thankfully took one look at us two and decided to go the opposite way, very very quickly…. wow that was just a little bit too close for comfort! After briefly discussing the current state of our underwear, and giving the bush that it had disappeared into a wide berth we decided to carry on. After another 15 minutes I could see that Jac was still a little shaken up by the experience and so we decided to head back to the restaurant for a calming cappuccino . A quick google search confirmed that it was definitely a Cape Cobra and indeed one bite had enough venom to kill up to six adult humans mmmmm gets yer thinking eh.

The photo below was not taken by me, if I tried that, Jac would have killed me even if the cobra didn’t!!!

We had dinner in the restaurant a couple of times in DeHoop including a stunning meal on Christmas Eve, and for once eating out on this trip lived up to expectations, staff here were very friendly and we even talked them in to letting us camp here for two nights after our 8 days in the room (£18.00 a night, thats more like it). 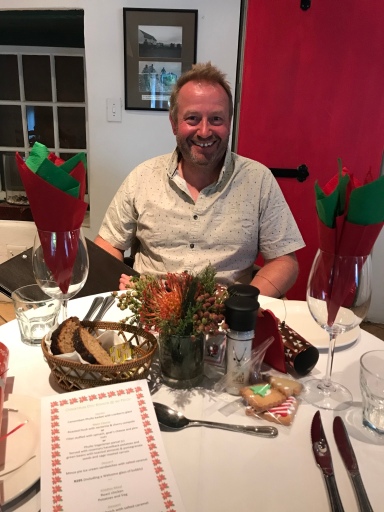 But after a total of 10 nights here it was time to move on to the second part of our pre-booked Christmas and New Year at Bontebok National Park.

Bontebok NP is very close to the “historic” town of Swellendam, and before we made our way to the campsite we first had to try to get two new 12v starter batteries. The ones on board Colonel K were simply not holding their charge as fitted nearly 7 years ago. As it was between christmas and new year almost everywhere was closed, and the batteries have to be the exact same size or they won’t fit in the battery box, eventually we found a place that was open and sure enough he had two in stock, nice one!

Despite the campsite being full we had a real stroke of luck and managed to get Colonel K parked in a fairly large and secluded spot, especially important as we were expecting our German friends Tim, Sarah and little Lady Elizabeth to join us here for a few nights.

First things first though, as it was new years eve we had to put up the Union Jack Bunting on Colonel K, this still didn’t stop the South Africans asking where we were from though. 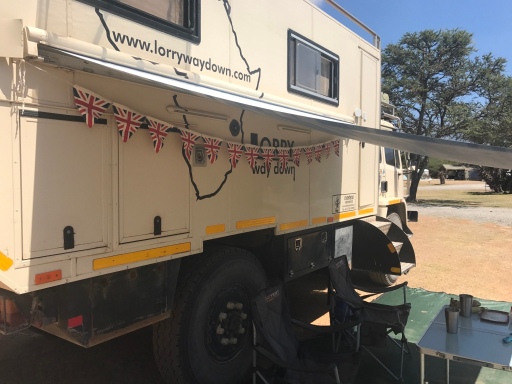 Bontebok NP really isn’t a place that you go to for game drives, its a very small National Park and was set up with the sole purpose of protecting the tiny numbers of Bontebok. Incredibly at one point only 17 Bontebok remained in the wild, but now thanks partly to the park here, the numbers have recovered dramatically, indeed we saw many while out walking in Dehoop. 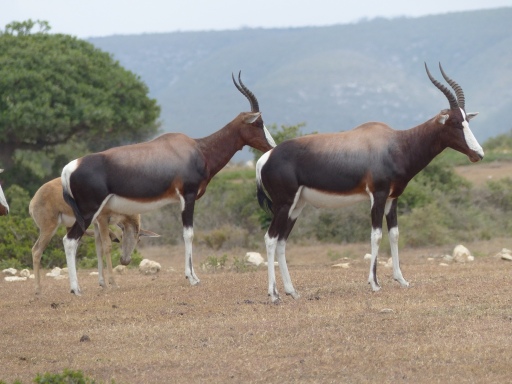 But its a nice campsite with a great river to cool down and swim in and there are also quite a few hiking trails.

“Ze Germans” joined us after a couple of days and squeezed onto our campsite , and we had a fantastic New Years Eve celebrating with them. 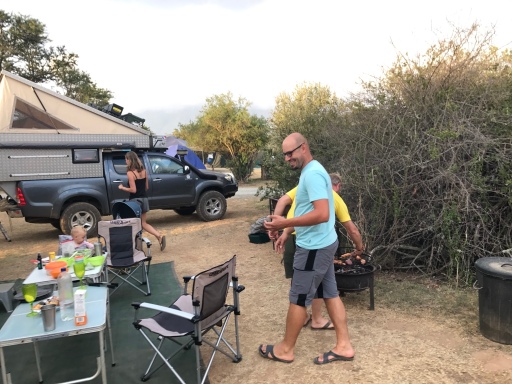 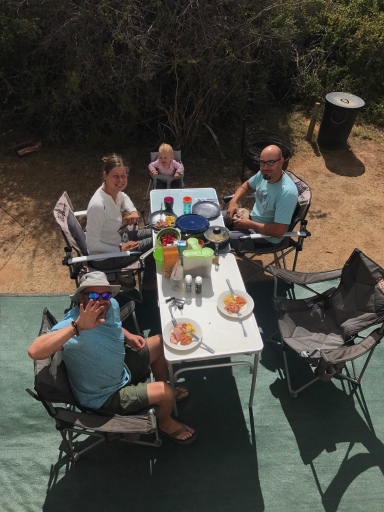 Of course “Lady Elizabeth” was as cute as ever and really is starting to perfect her ” royal wave” to her subjects! One day Tim and I took Elizabeth to the local spar supermarket in Swellendam, boy did she attract some attention, and she seemed to absolutely lap up the attention, especially from the ladies. Though what they thought of Me and Tim, and no women mmmmm…… not too sure about that.

Elizabeth did however have her reservations about our numerous camp visitors, that soon learnt that where she sat, it meant food. 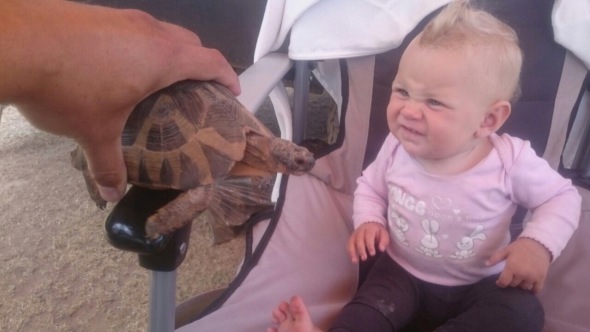 The River Breede was very welcome especially during the heat of the afternoon, and we found a use for one of the many inner tubes that we brought to Africa (obviously expecting many punctures), these big tubes make great flotation devices, oh and Tim had a tiny football. Boy did we have sunburnt heads one day….. 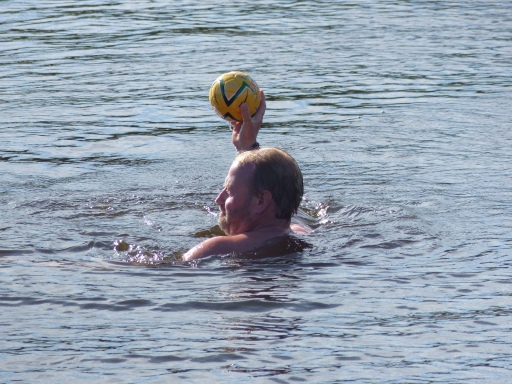 After Bontebok NP we headed for Ebb & Flow campsite in The Garden Route National Park, near the town of Wilderness and we are currently still here as I write this. This is another place that we have stayed before, and again a great place for walking and swimming in the river. Of course this is still a busy time and the campsite is full most nights with families on their holidays, mostly from Capetown (about 5-6 hours drive from here).  The beaches however are incredibly quiet and empty and of course the sea is quite warm. We have walked a couple of times into Wilderness (about an hour and a quarter each way) along the mostly deserted beach paddling along in the surf. 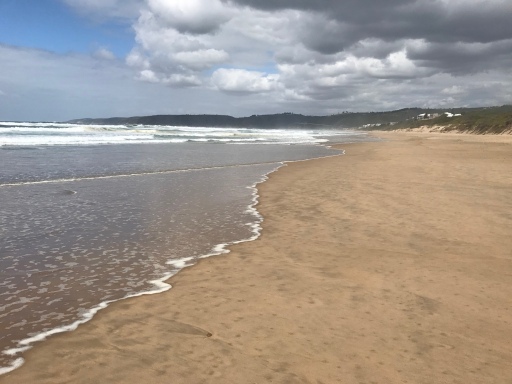 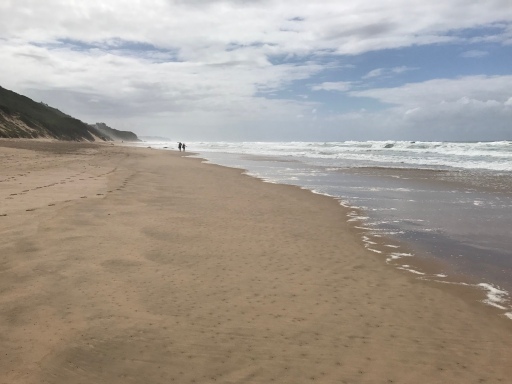 And the hiking up into the hills from here is very nice, especially as most of it is through the indigenous forest and thus mostly in the shade.

But we are parked right on the river bank, so it couldn’t be easier to cool off. 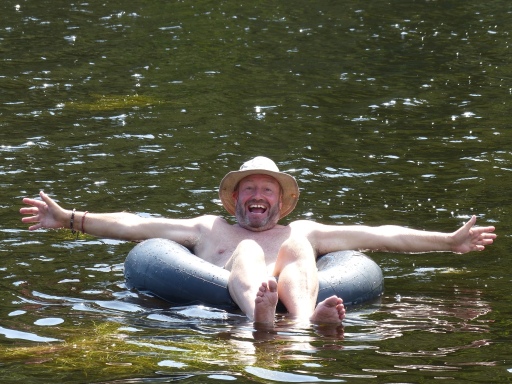 Sadly our trip to Africa is coming to a close, and we now have a booking number for Colonel K to depart the Continent on a Roll on Roll off ship from Port Elizabeth. There are so many things that we are going to miss from our little trip, maybe our next post on lorrywaydown will be a final one.

Our next trip in the Daf is likely to be to the North West of Scotland……. very different!  But there are lots of the world that we still want to see, and self drive camping is the only way to do it for us…….

6 Comments on “Xmas and New Year, a real chillin’ time”