We have now been “on the road” for 100 days and our 6th country. Since my last post we have purchased an outside plastic carpet to help cut down on the amount of sand that ends up in “The Col K” and it has definitely been worth Vinnie carrying it back from a Souk in 40+ degree heat in Ouarzazate. We still have our carpet tiles as a floor covering and regret not changing this to lino before we left, but we were in a bit of a rush at the time and it was cold in the U.K  and nice on “the feet”. So we continue the daily brushing up of sand and will change this when we get the opportunity. We looked in Morocco, but could not find anything suitable in the Moroccan version of B&Q (Brico something or other).

Whilst in Erfoud we stayed at a campsite that had a couple of washing machines, so I thought great, a few days off of hand-washing. The sign on the wall indicated that one should ask reception before using, but I wandered around for so long without spotting anyone, that I went right in and commandeered 2 machines- how difficult could it be? Loaded them up and settled down to relax. When I went to check on my washing, I noticed “Flashing lights” and both machines had stopped mid cycle. I went to fetch help and the manager found that both of the belts had snapped on both machines- he was not happy and proceeded to show me the sign that indicated I should have gone to reception -whoops! After about an hour they fixed the machines and I was able to retrieve my washing. 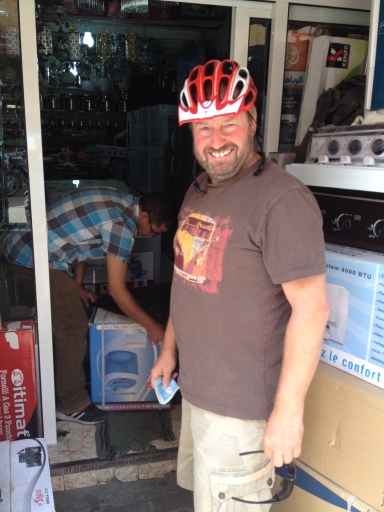 Whilst we were in Taroudant, Sally, whom we had met, showed me her “washing machine” on board their truck. Seemed like a good idea, so when we were out in Taroudant Medina Vince and Richard spotted a similar model for sale. We were all cycling at the time, but if you have ever been to Morocco, you know that “the locals” manage to carry anything on their cycles (goats, sheep,ladders, 3 children and the wife) so the purchase was made and balanced on the handle bars, going down the one way system, the wrong way. It was funny how all the locals shouted “attention” to us, but ignored all the other locals doing exactly the same thing! Back at the campsite, I’ve never seen Vinnie so excited, he couldn’t wait to unwrap it (may have been because he didn’t get a birthday present this year!). After it had been unwrapped and plugged in, we filled it with cold water & washing powder and set the timer (this is the only control on the appliance, very low tech, but a lovely red colour). Once washed, you still need to empty the water manually via a tube & then refill with cold water again to rinse, once or twice, quite labour intensive, but will hopefully help a little in getting the clothes a bit cleaner. 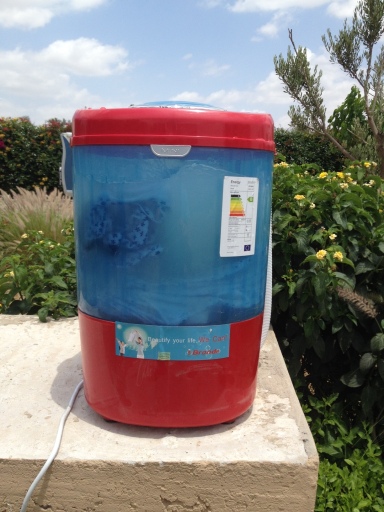 Guess what? We haven’t used it since! After leaving Morocco there has not been any electric hook ups, so we have been hand washing again. It seems unlikely that we will use it again, so lesson learn’t, when over-landing keep basic and don’t over complicate things. So back to the “pink” scrubbing brush & green soap!

As we have been cooking on board “The Col”, we have managed to maintain a good standard of food hygiene ourselves. Carefully selecting where we purchase food/meat, washing & peeling fruit and careful when eating out, especially at street cafe’s. Whilst in Morocco there were a few “French supermarkets” so we stocked up in Agadir before we left . This formula seems to have worked as we have been travelling for 100 days now and neither of us has been ill, yet!

Since hitting Mauritania and Senegal food shopping has been in local food markets and stalls. Mangoes are very much in season here in Senegal, so we are eating these for breakfast and lunch.

The change in currency has been a bit difficult to get your head around, as every thing is in hundreds and thousands (1000 CFA = £1.10). I had a very embarrassing time at a local Boulangerie when we asked for 2 baguettes, the guy said 3, so I immediately thought he meant 3000 CFA and said that was too expensive, so he dropped the price immediately to 2 without question. In my mind I still thought that was too expensive (£2) and we were being ripped off as tourists, so we walked away, without any bread. To put this little tale into perspective, it was very hot, we had been hounded by street children & beggars all morning and paid a little too much for some fruit we had purchased. Once we were safely back in “Col K” Vince said to me, maybe he meant 300CFA not 3000.This would have meant about 30p for 2 baguettes, not £3. I did feel awful, as I had made a point that he was over charging us, as we were tourists & was tempted to return to apologise . Well we did return, but a week later and I hid along the road, whilst Vinnie got the bread and guess what, he was charged 300 CFA. So lesson learnt , if unsure always get them to write it down or enter the amount into your calculator on your phone, as they don’t have pens & paper, or ask the price per kilo before you buy.

As a female traveller I have noticed some changes in culture. In Morocco most of the women adhered to quite strict muslim dress, covering head to toe. Again in Mauritania, this was evident , but the African women didn’t seem to cover their heads or arms. Mauritania is very strict about alcohol entering the country and it seems every vehicle is searched at the border.Whilst at the Mauritania border and waiting for our paperwork, a man came and introduced himself to us  and shook Vince’s hand,I went to shake his hand  as well and he refused, saying he was Mauritanian and it would not be correct to shake a females hand. This was probably the first time it became very clear that its a very dominated “Man’s” world .

In Morocco I decided to buy a couple of long skirts, incase I needed them for my travels. I got a very cheap “Amani” skirt in one souk! Once in Senegal the dress code seemed to change almost immediately & the women wear much more colourful clothes and whilst their legs are covered, their arms, shoulders and heads are often uncovered and they appear to laugh and smile more.

The battle rages on with the mosquitoes. Once we hit Mauritania, we were in a possible risk of Malaria zone, so have put the mosquito net above the bed and commenced Doxycycline, our preferred anti malarial medication. It is a difficult choice for the long term traveller and obviously individuals who live in Malaria areas do not take anti malarial medication for prophylaxis. Anyway despite the risk of side effects from taking Doxycycline, we haven’t experienced any yet and therefore will continue, unless things change. We are lucky at the moment, as we are staying in a campsite, Zebrabar on the coast, with a sea breeze most of the time, so this has helped a bit. As we are entering the rainy season, we are going to hit very humid conditions and more mosquitoes. Hence why we are laying low here for a while ! We cover up in the evenings and liberally coat any bare skin in “Anti Bug spray”. However we have still been getting mosquitoes in under our net at night. We have cello-taped all gaps and holes & have fly screens on all windows, but the little buggers have still got in. We think they manage to get in under the roll of the blind and then under our IKEA sprung slatted base, so we have dismantled that today so our mattress is tight against the base and we can tuck the mosquito net in all the way around. Fingers crossed for tonight.

We have stayed at Zebrabar  campsite for nearly 3 weeks now to chill out. Travelling can, believe it or not be quite exhausting and as this place is so nice, we have found it hard to move on. We have the sea,the breeze, nice cooked food and good company and have taken to opportunity to kick back and relax from driving and border crossings. Whilst here we met a group of children who come weekly, for a music session with Martin, the owner, as a project. They were so polite and it is difficult to tell that they have had such a hard start to their lives. They all wanted to pose in my sun glasses, hat and have their photos taken and the boys show off their acrobatic skills.They were even singing “shine bright like a diamond” by Rhianna to us, really nice kids. 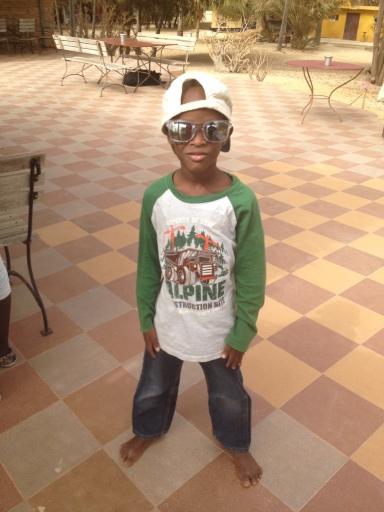 Whilst here I have been shown by Ursula how to treat a dog who has unfortunately had flies lay eggs in its skin (I think it may be Cuterebra) and these are small red lumps under the skin, which when squeezed produce a maggot. Not pleasant, but something that needs attention, and apparently the vets here are scared of dogs and are only used to dealing with livestock i.e. goats ,donkeys, sheep and cattle. So Ursula has become quite a proficient “vet”, treating her dogs herself and providing antibiotics and vaccinations (these are Lucky dogs, whom themselves were rescued from Morocco & Senegal).Ursula has also given us a tip, that it can also affect humans and should we suffer the same plight, if you put a piece of salami over the infected area, this will bring the maggot out of the skin, hopefully we will not have to try it out !

Yesterday we were treated to a visit to “The Dunes”, with Martin, Ursula, their 3 children and their friends. We piled into the back of their pick up and Martin treated us to his off road skills. Quite exhilarating sitting in the back of a pick up, on an old sofa going up  and down steep sand dunes. We stopped at the top of one to partake in a spot of “sand boarding”. Well I can safely say, the kids were much better than us! Great fun and thanks for a great day.

We stopped for lunch under a huge Baobab tree 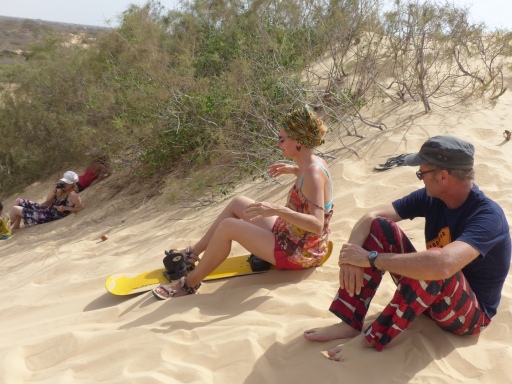 Ursula & Martin also having a go

You can tell we have been away for over 3 months as we both now have” travel heads”, my hair has grown and is curly, the grey is now about 1.5 inches from my scalp. Vinnie’s hair is the longest he has ever had it, and we are waiting to be able to put it up in a” footballers top knot “. I’ve given him the option of shaving it off, but the extra hair is actually protecting his head from the sun (well some of it and no comb over yet!) The beard is going well, but gets trimmed regularly (that is Vinnie’s beard not mine).