After leaving Spitzkoppe we headed North on the gravel roads towards Brandberg Mountain, via the tiny mining town of Uis where we stopped at the general store and stocked up with some fresh meat and vegetables. We also stopped at a community run Coffee Shop and during this trip we have tried to support local projects as much as possible, including local suppliers, and businesses. But some of these people have got a lot to learn about customer service, and we left here without buying any lunch (not what we intended). We were the only customers in the place and serving us was obviously a chore that the two waitresses couldn’t be bothered with.

The journey to Brandberg was as usual very stark but beautiful, and took us out of Erongo District and into the Southern part of Damaraland. On the way we saw this Rock Kestrel. 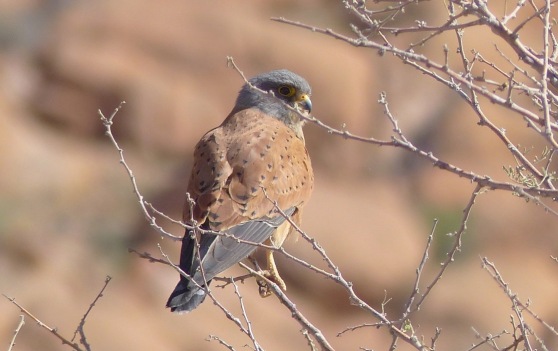 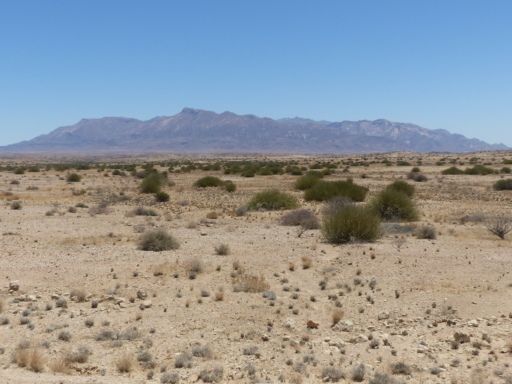 We stayed at Brandberg White Lady Lodge Campsite that was situated right at the base of the mountain, and after a quick drive around the site we choose a fantastic spot right on the edge of the dried up river bed. 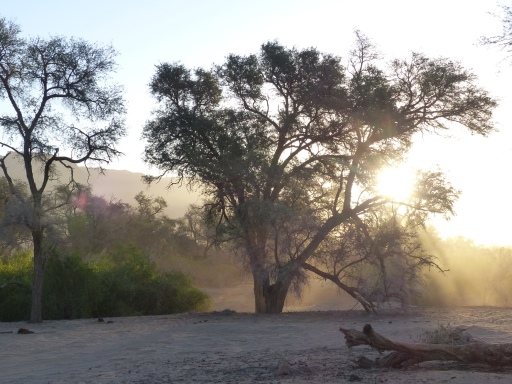 Damaraland is the home to the famous Desert Elephants, and we were lucky enough on our previous visit to Namibia to have seen them. They are very elusive animals, and because they travel such huge distances to find food and water, they are very difficult to find, and they are generally more aggressive than Bush Elephants. But our camp spot that we chose was covered in fresh elephant footprints, and dung, so our hopes were high in sighting them again (apparently they came through the site less than an hour before we got there). But despite staying here for two nights we did not see any elephants. We did however have a great time at Brandberg, and it really is a beautiful spot, and all for less that £6-00 per person per night. You even get a nice hot shower (heated African style). 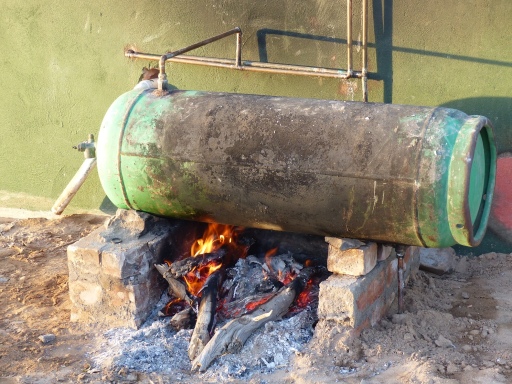 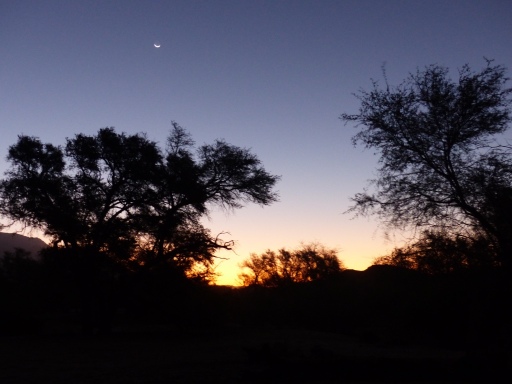 From here we headed up towards Twyfelfontein (this is not really a town or village, but more a “farming” community), this is home to a few touristy type attractions, such as Burnt Mountain, and The Organ Pipe rock formations. 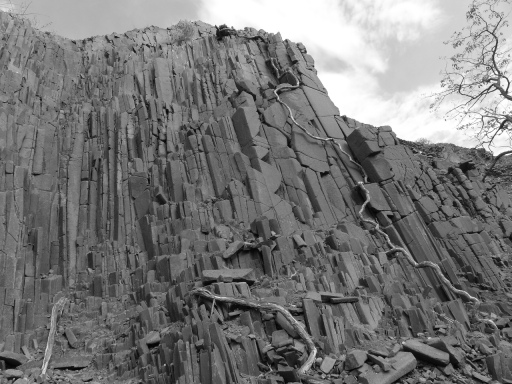 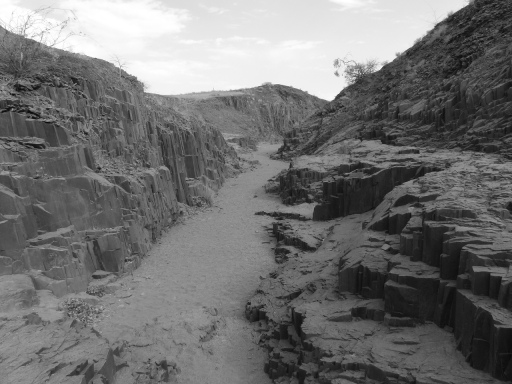 These “organ pipes” are thought to be 120 million years old, and are made from Dororite, which was cooled very quickly to make this unusual rock formations.

That night we stayed at a nearby campsite (that even had a bar!), and again camped right next to the dried up river bed (the Huab). 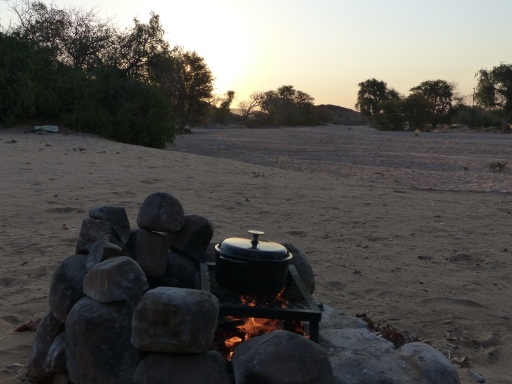 The following day’s drive was a very nervous one. Stupidly we were going to be very close to running out of fuel, with the nearest filling station in the town of Khorixas, about 120km away. We learnt a lesson that day, top up with fuel when ever you can! It was stupid because the last time we put any diesel in the tank was in Walvis Bay when we collected Colonel K from the port and even then we only put in 150 litres, and we have passed numerous places where we could fill up. Anyway we made it, so no harm done.

The gravel roads in Namibia are generally very good, but some of the minor tracks (which we tend to use more often), can be very heavily corrugated, and this is punishing for both truck, driver and passenger. The Daf has held up very well, with just a few fasteners working their was loose, and the odd bracket snapping, and thank god for our suspension seats that we fitted in the cab. 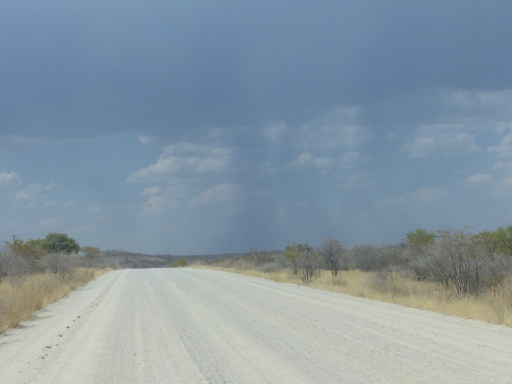 We learn’t one other lesson that night, taste the water before filling the fresh water tank up! We stopped at a fantastic campsite about 5km outside the small town of Kamanjab for one night. As there was a tap right next to the truck so we decided to top the water tank up (we had not done this for nearly a week), and it proberbly took about 75litres to move the gauge nearer to the full mark (more later).

Early the next morning we set off for Etosha National Park. When we were in Swakopmund we found out that a new campsite had recently been opened in the Western end of Etosha, called Olifantsrus, and until this camp had opened the only way to visit this vast area of the park was to stay in one on the exclusive tented camps there, so we decided thats where we would head for. The trouble was that we were told that the site had to be pre-booked, or you would be refused entry into the park at Galton Gate. Obviously that wouldn’t work for us as we didn’t know what dates we would want to book for, so we took a chance and just drove there. We needn’t have worried as it was not a problem, we paid the park entrance fee’s (£4.60 pp per day), and then drove the 75km to the campsite, via various waterholes for a spot of game viewing. The park is huge with the drive from the West Gate to the North Eastern Gate being 350km (there is a fuel station though). 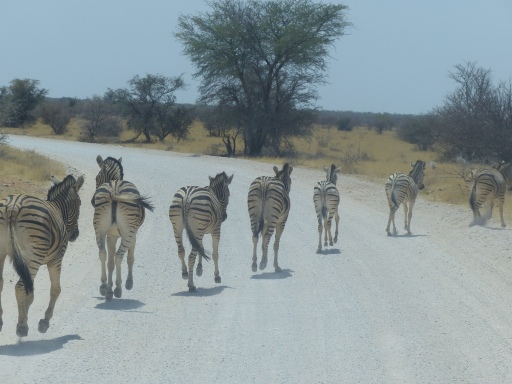 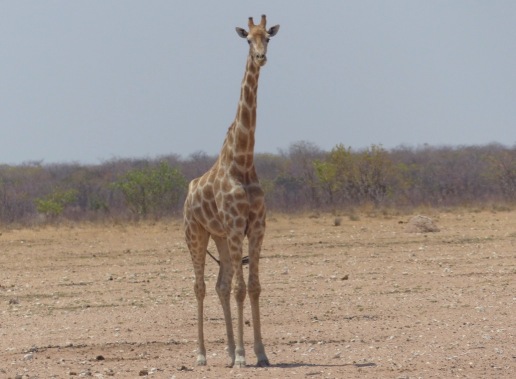 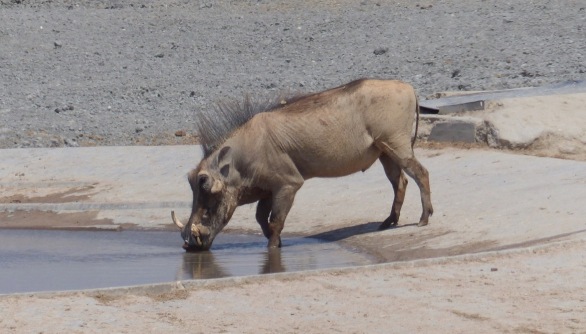 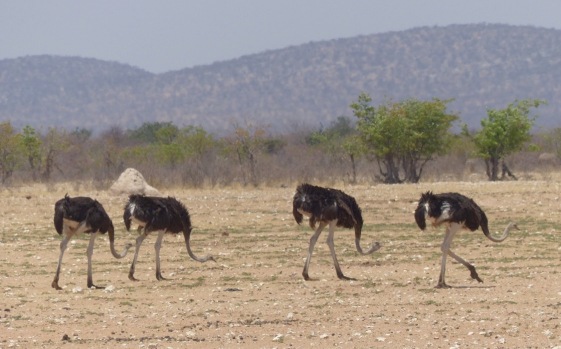 When building the camp at Olifantsrus, (£12.50 pp per night, which is approx twice the price of most places but still a bargain) they decided to construct a new waterhole just outside the campsite fence, and a viewing hide with a foot bridge that takes you over the fence and right next to the waterhole.

From here we had the most amazing experience, and took the decision not to just jump in the truck and do more game driving, (this is the obvious thing to do, but in this heat there not much animal activity during the day), but to stay put and see what comes to us over the course of the next 24 hours. As you can see below quite a bit actually came to see us! 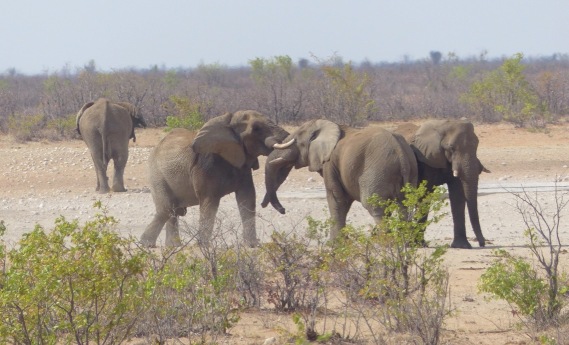 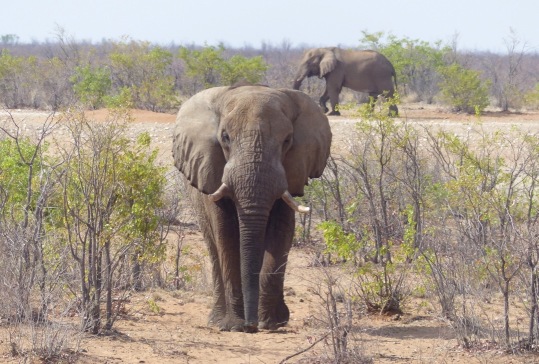 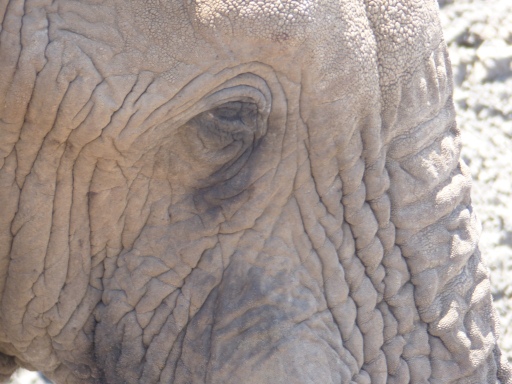 And not only Elephants, also (below) Kudu, 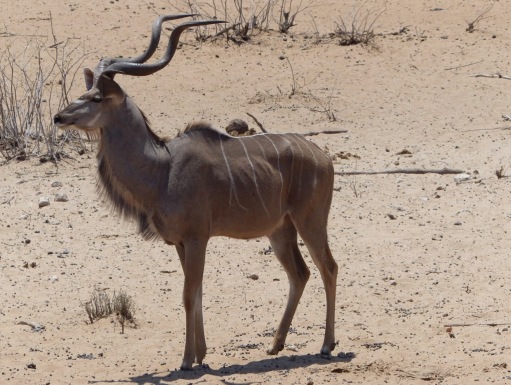 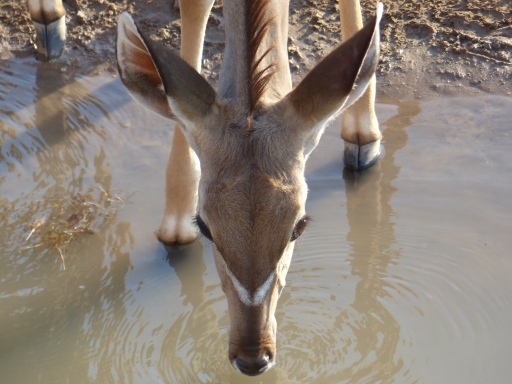 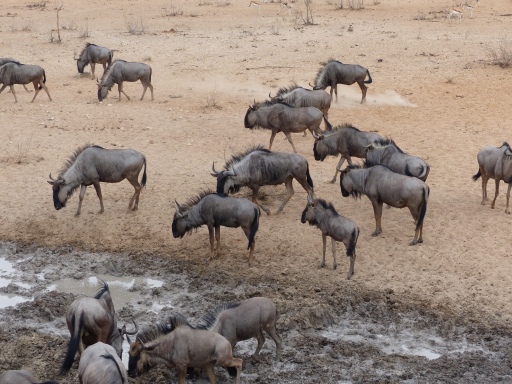 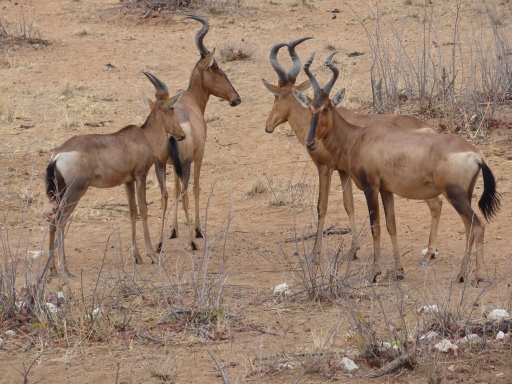 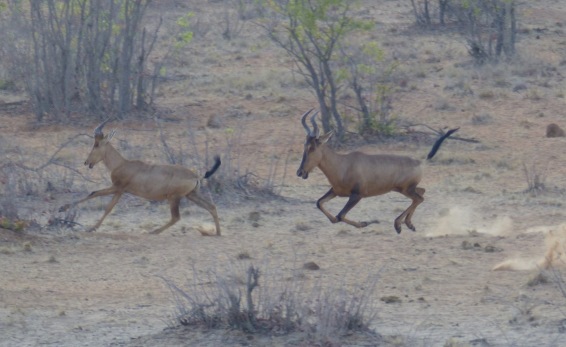 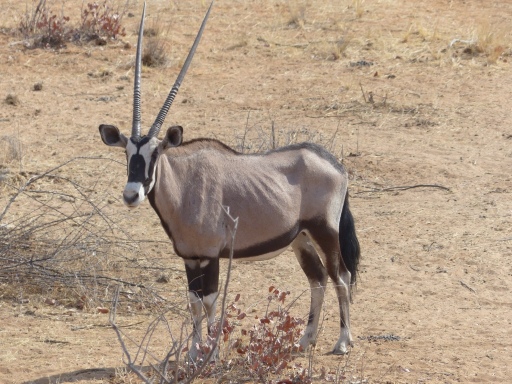 And everones favorite, the Birchell’s Zebra 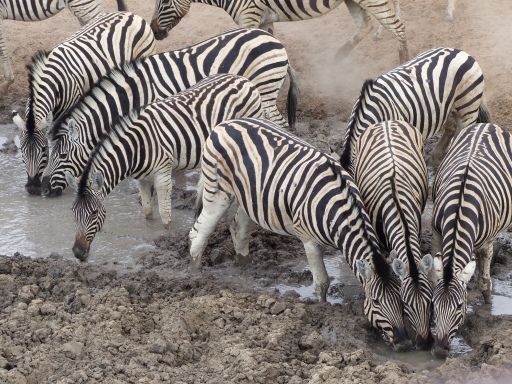 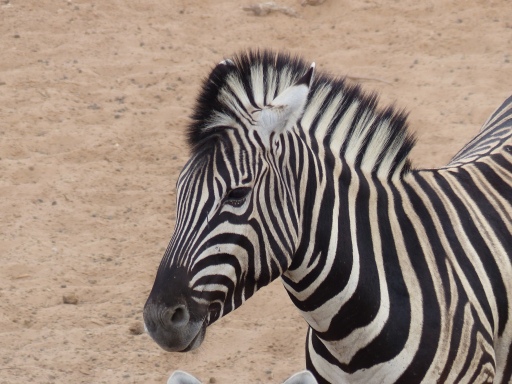 We also saw this extremely lucky (if the wound doesn’t get infected) Springbok, that looks like it had a very close shave with a Lion. 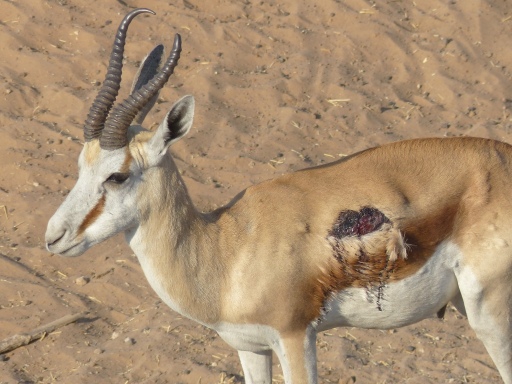 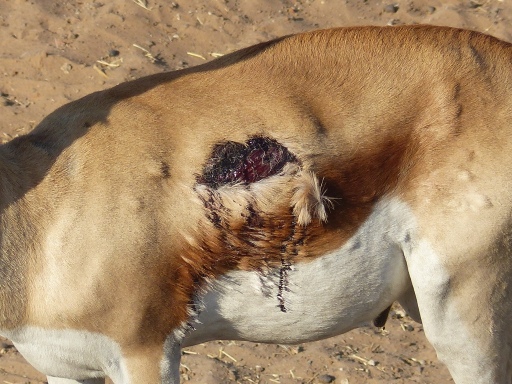 At night you can still visit the hide, and though the hide is in darkness, there are infra red lights over the water hole, so you can see a short way out into the vast blackness. The first evening we were there we were treated to 2 male White Rhino, and a female with a young calf. We watched the males jousting with each other, trying to compete with each other, and we watched both the males retreat away from the female Rhino. It was fantastic to watch these huge animals at such close quarters in their own environment. There were also visits from jackal’s, and a herd of Eland (a huge type of Antelope).

The evenings are now much warmer than when we were further South (quite hot actually, with night time temperatures not getting below 25c and day time well above 35c with a scorching sun), and its lovely to sit outside and eat even after dark, without needing anything more than teeshirt and shorts. There are a few flies in Etosha, but not as bad as we have experienced during our trip, and there is only a very small Malaria risk (though we are still taking our preventative medication as we will be going up to the Angola border afterwards). We have even experienced a few drops of rain in Etosha, and have seen quite a few violent storms in the distance after dark. It is also quite windy at times, and we do have to consider the position of the windows if we are leaving the truck, especially after having one ripped off in the tornado that hit us in Mali.

Anyway back to the water tank! That 75 litres that we put in because we weren’t sure about availably in Etosha, must have had a fairly high salt or chrorine content, as now our drinking water (comes through a purifying filter) has a mild salt taste, not a disaster but not nice either! So next time we will taste the water before putting it into the tank. Obviously we can’t just dump between 250 and 300 litres of water and start again, so we will drink bottled water for a time until we use the remaining water for, showers, washing up, clothes washing, etc. We may have to change the water filter again (this we have just done) if that is also tainted by the salt content.

Posting the blog is becoming much hard in Namibia, when in North and West Africa we almost always seemed to be able to get a 3G signal from a local sim card, then hotspot the laptop to that to send it, unfortunately although most of Namibia is covered by a mobile signal, most of the rural area (about 90%) is covered by 2G signal (E as its called here), so we can only upload a blog when we are in a more built up area. So some blog posts my be quite a bit out of date by the time they get uploaded onto the Lorry way down, and another may follow very quickly afterwards. But hey That’s Africa!

← Namibia, out into the Desert
Etosha East, and beyond →

2 Comments on “North to Etosha”