Etosha East, and beyond

Our last night at Olifantsrus was marked by a massive storm hitting the site, we had seen dozens of storms off in the distance for the last 2 or 3 nights, but had just seen lightning, dramatic, but way off to the North. This time it was different, we were in the hide when it started to rain, gently at first, then the wind picked up, and the rain absolutely hammered it down, in huge great blobs. The trouble is we had left the windows open in Colonel K, and we didn’t want a repeat of the Mali storm where we lost a window. so we made a dash for it. We were out in it for no more that 3 or 4 minutes, but we were soaked, really soaked. No harm done, but its weird that even when its uncomfortably hot and sticky, you still want to get out of the rain! You can’t please us travelling Brits.

By morning, any sign of rain was gone (the storm only lasted about half an hour), but I’m sure that the plants and animals of Etosha were grateful for what must be the first rains of the rainy season (it doesn’t rain much here even in the wet season). We packed up, and set off on the 200km drive through the park to another campsite, this time in Okaukuejo, this is located at the Eastern end of the famous Etosha Pan, but we had been warned that we are unlikely to be able to stop there, as its usually fully booked in advance, but we would try anyway.

On the long slow drive on the bumpy, corrugated gravel track, we took quite a few diversions and stopped quite a few times watching game and at various water holes, at one particular spot we were watching lots of Springbok and Wildebeest, when out of the scrub wandered this beautiful young male Lion. 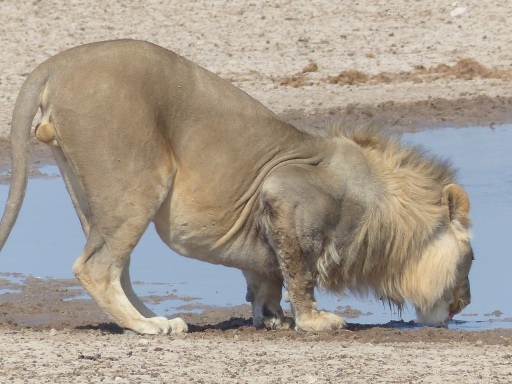 It was fascinating to watch how all the other animals “backed up” and refused to muster the courage to approach the water hole (even the far side) all the time that he was there. After drinking (it was seriously hot in the midday sun) he just laid down and chilled, completely oblivious to the anguish that he was causing, I guess they just had to wait. He was still laying there when we left!

This was before he arrived! A happy scene….

These massive birds nests are home to lots of Weaver birds, and we were once told that you shouldn’t stand or camp under them as they are particularly attractive to snakes and especially Black Mamba’s, who feast on the easy picking of the eggs, and can just drop from the tree at any time.

As we approached the edge of the Pan, it got very dusty, but there were an extraordinary large number of animals in this inhospitable place. 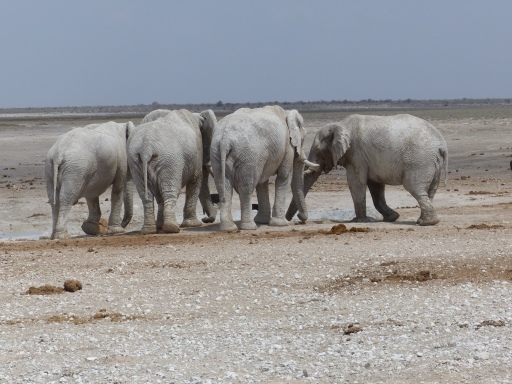 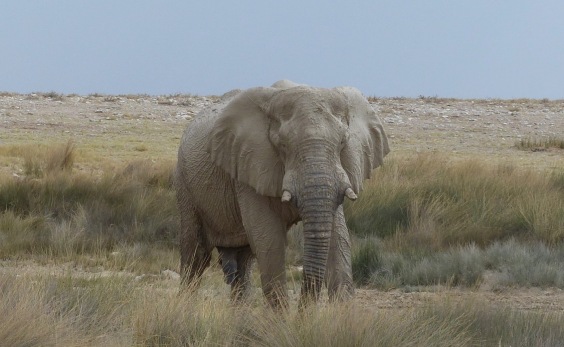 When we got to Okaukuejo, we bumped into Phil and Angie in the car parking area in their Iveco camper, they had entered the park from the nearby southern Anderssons Gate (we had entered by the Western gate), and were also trying to camp here. As we thought, they were fully booked with no available space, and the staff suggested that we drive the further 65km to the next campsite at Halali, where there should be space available at the much bigger site. Phil and Angie decided to do the same, so we agreed to meet them there later in the day. The waterhole at Okaukuejo is a well known game viewing spot, and we were a little disappointed that we weren’t able to see an evening here. But you never know, perhaps Halali would be a nice surprise.

Although the campsite is huge (about 75 spaces, and not the sort of place that we usually stop in, but its impossible to wild camp in Etosha), the waterhole was very interesting. When we arrived in the early evening, the first thing that struck us was how many people were sat  watching the waterhole, the other thing that you immediately noticed was that there was a dead young Elephant on the other side of the water. 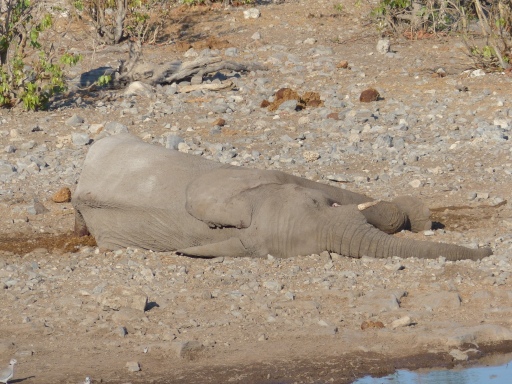 It obviously hadn’t been dead for very long, but strangely there were no other elephants around, so either it was on its own at the water hole, or its group had left, it we don’t know. We also don’t know what caused it to die, there were no obvious wounds or injuries on the body,.

As darkness started to fall, we were treated to some very strange behaviour. 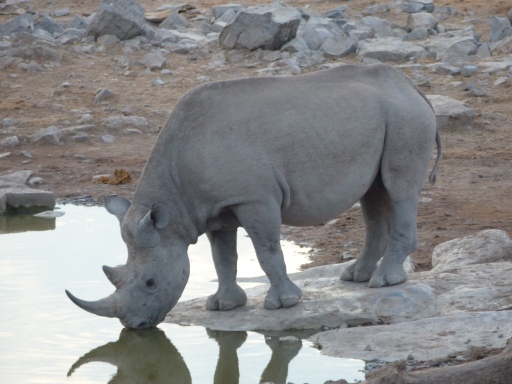 Quite quickly six White Rhino appeared out the darkness and into the artificial light of the waterhole, including a mother and calf, one of the adults lay down alongside the dead Elephant and stayed there for almost an hour, it then got up and seemed to try to get the Elephant up on its feet, by nudging it with its head, it then seemed to lay across the body, and using its weight tried to push it up or Jac thought it looked like he was trying to resuscitate him. The other Rhino’s also approached the Elephant and most nudged it gently, and seemed almost upset or mourning the passing of this superb animal. We also experienced again the amazing sight of Rhino’s going head to head,almost in a social embrace (sometimes for 10 minutes at a time) and jousting with their horns. It is very easy to watch these amazing, intelligent animals for hours.

That night in bed in Colonel K, we could hear the nearby call of Lions, and also the cackle of Hyena, so we assumed that come morning most of the Elephant would be eaten. In actual fact, from our viewpoint there were no obvious signs that predators had been there (but we were told that both Lion and Hyena had been feasting on its belly area). Then after a few minutes this little Black Backed Jackal popped his head up, very nervously, but it was an opportunity too good to miss for him I guess (you can just see his head above the carcass). 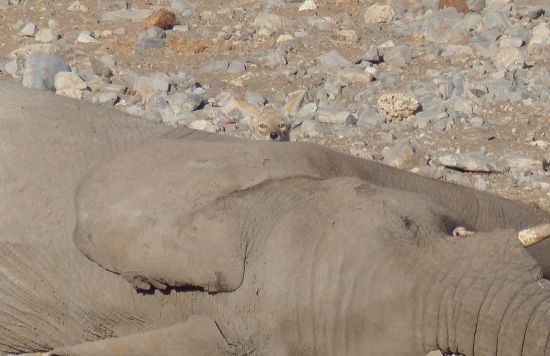 Everything was very nervous around the waterhole that morning, probably because the smell of Lion was still very evident.

We only stayed at Halali for one night, and once again said our goodbyes to Phil and Angie (who had arranged to meet up with Andreas and Mareike a few days later to travel back through the park and to tour Kaokoland together), and we headed towards the East gate at Namutoni. Even on the exit of Etosha, there are always a few surprises for you if you look hard enough. We spotted this pride of Lions sheltering from the heat, just outside the gate, four females and two males, all fairly young. 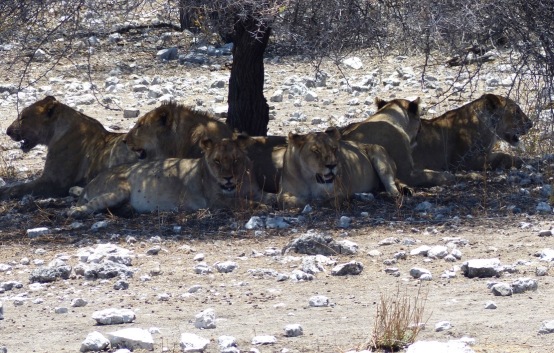 You can get some idea of the heat even at mid morning, with this photo of a Giraffe with Etosha Pan and its heat haze behind.

From Etosha (no more wildlife pics for a bit….I promise…….), we drove about 80km to the nearby town of Tsumeb, stocked up with fresh meat and Veg (there is a Veterinary check point as you travel South from the Etosha area, and any uncooked meat will be taken from you in a bid to prevent the spread of Foot and Mouth disease) and then found a campsite on the edge of town. We spent a couple of days here, doing chores like washing (theres a washing machine on site), and maintenance issues on the truck. During the check we noticed that the diesel pump for the water heater had broken free from its mounting (the one supplied I think), and so made up another that now bolts directly to the chassis rails. We also bought a new larger tarpaulin in town to try to keep as much dust out of the bikes on the back rack. This tarp only had eyelets in the corners so we purchased a kit to fit another 20 eyelets around the edges.

We also cleaned out all the locks and catches, that were full of dust. The living area of Colonel K has remained surprisingly dust free from when we are driving on the gravel tracks, but obviously once you park up and open all the doors and windows, any dust that is blowing about will get in there.

Also while at Tsumeb, we took the opportunity to empty the water tank to get rid of the horrible salty taste that we picked up a week or so before (previous blog), and refill the 300 litre tank. We took this decision after watching thousands of litres of clean drinking water getting sprinkled onto the grass every hour at the camp site. The problem is solved and there was no need to change the water filter, which is handy as there are no suppliers of replacement filters anywhere in Africa. Hopefully our spares will last us the rest of the trip. Fresh water really isn’t an issue in the urban (ish) areas of Namibia, weird but true.

Even on the fairly large campsite on the edge of town there is still plenty to watch and see. One evening we walked to the nearby bar to watch rugby (South Africa v New Zealand, and very loud in the bar), and as we walked out the side door we were confronted by about 10 Banded Mongoose’s, we later saw them over by the truck. Then there are also our little friends that were living in the tree above us. 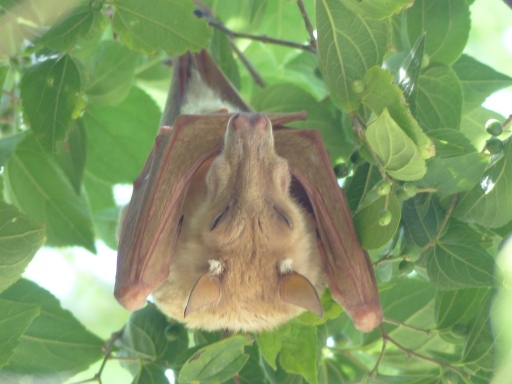 These bats are funny little things (not so little actually), and are quite awake and aware of you as you move about below them, at dusk we watched them leave the tree, they fly so low and close to you.

We had a walk into Tsumeb, which took about 45 minutes each way (it was scorching hot, carrying water is a must), and its a strange old mining town, mixing old and new, including this old Roman Catholic Church.

And this Copper mine that is right in the centre of town, and towers way above the other buildings. 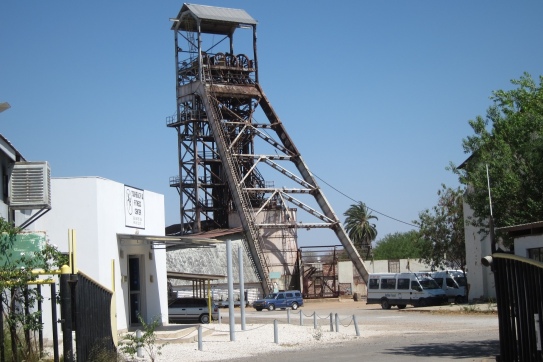 Whilst at Tsumeb, a group of mostly retired German tourists arrived in this 1967 Magirus, Deutz, ex firetruck that the guy converted into a safari tour bus 15 years ago, they had just completed a three week trip to Namibia and Angola, and were sleeping in ground tents. It made the Leyland Daf seem positively new by comparison.

Our “current plan” is to leave Tsumeb, and head north past Etosha, and travel across the wet (ish, its all relative out here) delta area of Owamboland along the Angola border to Ruacana Falls, and then across to Epupa Falls in Kaokoland (also on the border with Angola), we will then travel south and then head over to the Skeleton Coast and head back towards Swakopmund. This will then take us about half way though our 3 month Namibian visa that we have been granted, so will still give us plenty of time to explore the southern half of the country. It will be quite a bit hotter in the Kaokoland and the border area, though trust me its warm enough here right now……….

It may be a while before we get chance to post the next blog, so no more boring animal or sunset photos for a bit eh,

Hi to all our family and friends back home.

← North to Etosha
Namibia, Kaokoland and the Himba →

4 Comments on “Etosha East, and beyond”