Zagora was a shock, with very pushy people outside virtually every shop. The trouble is, the whole town has geared up to sell to tourists and once again we seemed to be the only Western tourists in town. Its strange, because even in our 16 year old Morocco guide book, it is mentioned about the hard sell that is done in Zagora. Every man and his dog wants to sell you a night out under the stars in the dunes of the Sahara. So after a quick bit of shopping, a couple of coffee’s and a visit to an ATM machine, we walked back to our campsite (obviously the only people there for a second night).

We had already decided to head South from Zagora, to the end of the road to the dunes of Erg Chebbi, at the village of M’Hamid, this is a fairly short drive of about 100km from Zagora.

The drive down the “road” to M’hamid is very picturesque, and takes you over a range of hills called Jbel Bani, from the top, the view back towards Zagora show the desert that we had just driven through.

At the very top of the highest peak, was an old abandoned fort of some description, we couldn’t find any information about it, but the fact that at sometime it was used as a defensive position and the effort that went into building it right up there (it looks very inaccessible) is amazing.

When we got to M’Hamid, we of course drove right to the end of the road, only to be faced with a load of lads selling excursions, or pots, or scarfs or ………….. well you get the idea, it was like a mini Zagora, only this time we were definitely the only tourists in town. It was also very windy and very dusty, so we decided to stop in a cafe for a drink and a bite of lunch on the terrace and to decide what to do. There was no point in staying at the campsite in M’Hamid, it was completely encircled by a massive dust cloud.

M’Hamid is extremely close to the Algerian border (approx 20km across the dunes), and for this reason there is a huge new military base just outside the town, with several watchtowers, and vehicles (mostly motorbikes and the odd Landcruisers). It does illustrate the tensions that remain between the two countries.

After a windy, dusty lunch, during which time virtually the whole male population of M’Hamid stopped what it was doing and entered the Mosque opposite to pray, we decided to back track up the road to another village called Tagounite, to find somewhere to camp for the night. We found a site at the back of the village, and was warmly welcomed by a young lad that was obviously looking after it. We found a semi sheltered spot and set up for the evening, and yes you guessed it we were the only ones there again.

The young lad appeared again after about half an hour, to ask us if we would like to use the pool, which apparently he built himself!, this we just had to see!

Mmmmmmm, apart from the odd fork and spoon, oh and empty can in the bottom it wasn’t too bad…… really! It turns out, his “swimming pool” was actually a holding tank for an elaborate irrigation system. Each day it is filled up with water pumped up from the deep well next door, and then when the heat of the day starts to reduce (from about 44c in the shade), it is released into the network of channels to water the very small scale crops, the pump then continues for a couple of hours, trickling more water into the channels.

You can see the drive belt powering the pump, and the well is under the timbers. The best bit of it is, that I’m sure this lad charges his mates from the village to use the “swimming pool”. Very enterprising.

The next day we set off for the town of Erfoud (or Arfoud), after looking at the map, we thought we would head across country and avoid the main road back through Zagora. On our map we could see that it was either a very minor road or a dirt track, so we set off in that direction. We very soon came to a sign telling us that ahead was 54km of “piste”, or dirt/gravel track. We pressed on and sure enough the tarmac road disappeared. It wasn’t a difficult route, but it was slow going and very rough, max speed we could do was about 35kph in places, but most of the time it was more like 20kph. After a couple of hours of Colonel K doing his best to damage our spines, we came across the N12 tarmac. The truck was unscathed, and so were we, we will have to get used to this.

Being out in the middle of the desert on your own, off the road, with no other vehicles, really can make you feel very vulnerable, but it was a good exercise for us.

After getting involved in near gridlock in a small town with other vehicles not being able to pass, we stopped for lunch in a local cafe, the guy that served us spoke a little english, and he said he would get a mixed omelette made for us, perfect. When he brought it, it was more like 4 fried eggs with olives, cooked over onions, tomatoes and herbs, all served up in the frying pan, no cutlery, just bread to scoop it out with. It was delicious.

On leaving the town there was a small diversion through the Oued (river bed), due to the complete collapse of the road bridge, I’m just glad it didn’t happen with the Colonel on it.

An old derelict abandoned village on the hills above the road.

We arrived in Erfoud, late in the afternoon after doing about 350km, and quickly found a campsite about 7km outside of town. Its a nice site with a pool that so long as you don’t mind sharing it with a few dragon flies, pond skaters, and a bit of debris, is very inviting.

Best to keep your ears, and nose out of the water then.

On the way to M’Hamid, Jac decided to buy a water melon from a tiny kid miles from anywhere, the cost for this huge fruit? About 75p.

It was massive and will last us many days as long as it stays fresh, trouble is its filling up both our fridges!

We decided to catch a taxi into town, to get some bread etc. So we walked out of the site and stood waiting for a taxi to hail down. After about 3 taxis went past (completely packed to the gunnels with people and goods), we realised that all the taxis heading into town were going to be full. So I changed tact, and thought I’d try thumbing a lift with a normal car, first car was a VW Golf (old one, obviously), he stopped, we piled into the back, and thanked him and the young lad in the passenger seat. He drove us right into the centre of Erfoud and when Jac offered him some Dirhams (local currency), he refused, and seemed a little offended. What a nice guy, and it goes to show how safe Morocco makes you feel. I’m not sure I’d do that at home.

Whilst in Erfoud, we decided to make use of the washing machines at the campsite, so Jac loaded both machines up, and set them to work, after about 40 minutes she went in to check them, both machines had broken! The manager wasn’t happy! But eventually after replacing the belts on both machines, our bedding and clothes were clean and hung out to dry.

The lot was completely dry in about 30 mins!

On the evening of our second day in Erfoud, another Overland truck pulled into the site, together with a Toyota LandCruiser, the truck was an immaculate MAN, German built, but on French plates (you can see the truck in the “Overland Vehicles” section on this blog). The truck parked quite close to us, and before long a game of “Truck Top Trumps” ensued! I lost big time!!!

Jac was especially jealous when Bruno revealed what was inside one of the locker doors….. 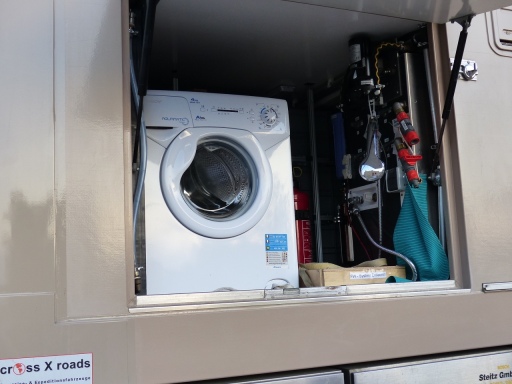 It wasn’t long before we joined Bruno, his wife Francois, and their friend Pascal, for Champagne, beer and wine, oh and a few french nibbles. Bruno was great fun, and although he knew we weren’t fluent in French, and he couldn’t speak much English, he insisted to talk to us at 100kph in French. He is also convinced that we will be eaten by cannibals in Cameroon!!

They told us about their previous travels in a 30 year old Unimog, when they drove across Asia, including the sad tale of them losing their dog to a tick in Kazakstan, the dog died within 4 days of them finding the tick.

On the last evening in Erfoud, we felt a few drops of rain, very large drops. There was a violent storm in the distance, coming from the Sahara that got even more dramatic the darker it got, we could see the sheets of rain over the hills, but it still missed us. When we left the following morning, we took the small direct road that took us up into the hills, and we could see the result of the storm. Less than 20km from Erfoud, there were flooded areas of ground, and flowing water in the normally dried up Oued’s (river beds). It was very isolated and it wasn’t long before we were back in the dry barren and open areas that they usually are.

We are now in a small town called Skoura, which is just West of Dades Gorge, we plan to stay here for a couple of nights, and tomorrow we are going to walk into the town to visit the famous Kasbah here that was built in the 1600’s.

Our Carnet de Passage (basically a passport for the truck) has been paid for, the RAC has printed it and had it delivered to our friends Richard and Jocie back in Kent, they are kindly going to send it by DHL (together with 4 gas struts for our roof windows, as two have already failed, and it seems a common problem), to an address in Agadir. We will then hopefully just pick the package up, and can then take the long drive down to the Mauritanian border. We are going to take a chance and hopefully obtain our visas at the border this time, as otherwise we would have to drive back up to the Mauritania Embassy in Rabat to get these. We know it will cost more for the visas at the border, but it would be at least a 6 day round trip back to Rabat in the North. Fingers crossed that they are issuing them at the border or it will be a massive drive back to Rabat for them!!!

It has been 60 days since we left a cold damp Hastingleigh, and in that time we have covered 4,000 miles (6,400km), met some great people and are absolutely loving it!