On our last post we mentioned that we were in the large Oasis of Skoura, well the next day we went off to visit the oldest, and best preserved Kasbah in the area. We set off on foot and had to cross a dry river bed, it was extremely wide, and we wondered when the last time water actually flowed down this part of the river, it was about 200m wide.

The Kasbah itself is simply stunning, and is in amazing condition for something that was built around 1670, and is constructed from mud and dried grass. 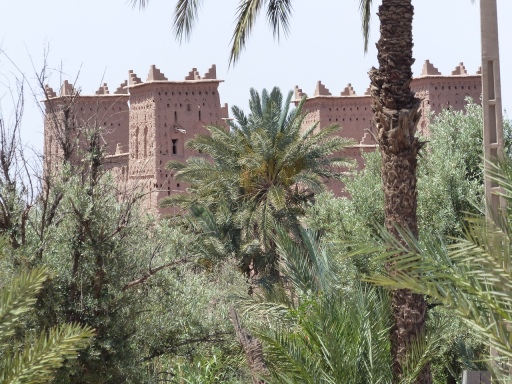 The main purpose for the Kasbah is to house and protect the rich learned teachers of the Koran & their extended family that owned it (probably about 30 people), but outside each Kasbah would be a Ksar (or general village), this is where the poorer families would live in much more modest homes, but when the area was threatened with attack, the inhabitants of the Ksar would move into the Kasbah for protection. All the grain for the area would also be stored in the Kasbah, there was also room for goats, cattle, chickens etc on the ground floor.

And the following was taken from the roof top, showing the dried up river bed on the right hand side.

We had a young guide showing us round, and I asked him about the river. He said it was last full of water last November, and he proceeded to pull out his mobile phone and show us a video clip that he took . I couldn’t believe the amount of water and the ferocity of the flow, it was bubbling and churning like a white water rafting spot, and was right up to the top of the bank. Walking back across the dried up river bed afterwards, was not quite so relaxed knowing that!

When we got back to the campsite we received a message on the lorrywaydown from a couple called Richard and Sally, they had heard that we were travelling down through Western Sahara, Mauritania, Senegal etc, and though they had not planned to go that far South, wondered if we fancied meeting up, and maybe go down to Senegal together. So, we found out that they were about 200km West of us in a campsite in Taroudant, and arranged to meet them there the following evening.

The road was once again quite mountainous, and as usual simply stunning. 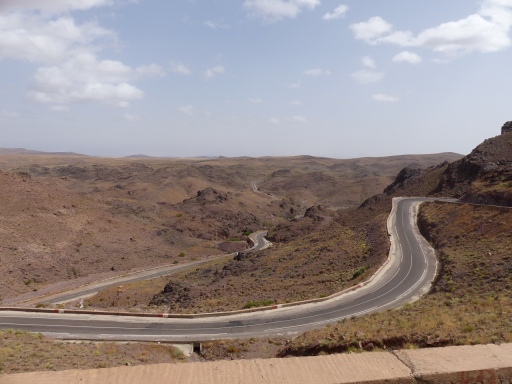 We spent the day with them visiting the town (on our cycles), and spent the evening discussing our travel plans, and the logistics of them joining us (such as visa’s, medication, yellow fever certificates etc). Yup, despite the hassle, Rich and Sally are joining us for the first couple of Countries after Morocco. We had still to pick up our Carnet de Passage in Agadir, so we decided to all travel to Agadir together to a site about 12km North of the City, that Rich and Sally had stayed in when they were with some other friends that had flown out to Agadir to meet them.

Richard and Jocie, back in the UK, had kindly posted the package via DHL Express at Staples in Canterbury, and within a couple of days, it had gone to Heathrow, Brussels, Paris, and then on to Casablanca. And thats where it has remained for the last 4 days, stuck in Customs. We’ve tried everything to get it released, sent them copy of passports, driving licence, and pictures of every item in the box (documents, replacement window struts, a UK 3 pin plug, fuses, and a roll of insulation tape). After a brief visit to the Agadir branch the day we arrived, we left feeling “that was easy” and what we thought a very slick process. They promised that they would forward all of the details to customs along with copy of passport etc and confirmation from the manager that they would then contact us to let us know when the parcel arrived in a couple of days. How wrong we were! We have since had lots of phone calls to customs and the Agadir branch, which has been extremely frustrating and can safely say we are not at all pleased by the service that DHL have provided.

Whilst in Agadir, we have sourced a submersible pump and hose, as recommended by Bruno and his wife (the french couple we met in Erfoud), as essential for getting low lying water into our water tank, such as when low tap pressure won’t push it high enough, or for pumping from wells. We have also been to a Carrefour supermarket, to restock with items that are harder to find else where. Oh and there’s a booze section hidden in the dark and dingey basement!

In the meantime Rich and Sal have been using the time to sort out some Anti-Malaria tablets, making up and copying Fiches (a sheet of paper containing your personal, and vehicle details together with your photo, these are used at check points etc), and sorting a few bits on their truck, Oh and fixing his BMW GS that he has on board (the clutch actuating lever had snapped). I’ve put photos of their truck in the Overland Vehicles section of this site.

We have been promised that the package will be released today, but with DHL Agadir only open half a day tomorrow (Saturday), and closed on Sunday, its looking likely that it won’t be able to be picked up until Monday. Thats Africa!!!

We have been taking it in turns to cook in the evening, with Rich doing us a fantastic slow cooked Pojki (I’m sure the spelling is wrong, but its a South African dish), with Lambs neck, and veg…….. mmm lovely.

Sadly as I’m finishing writing this blog, Richard and Sally have decided to have a rethink about their travels plans, and have now decided to go to Zagora, which was their original plan, rather than go South across the border into Mauri, and Senegal with us. The reason is, that the vast distances, and time that it was going to take them to get down there with us, and get back, was proving too much. It was also going to be a very expensive few weeks, with Visa costs and fuel etc. We wish them all the best on their travels (they are also about 2 months into a 24 month trip), and thanks for their fantastic company for the few days we spent together.

So we are now back to being “Billy No Mates” again, and are itching to get that package from DHL, and move on to the next chapter of our adventure. In the meantime, I need to get the factor 30 out, then maybe a trip to the pool for a cool down…… frustrating, yeah I know but thats Africa!